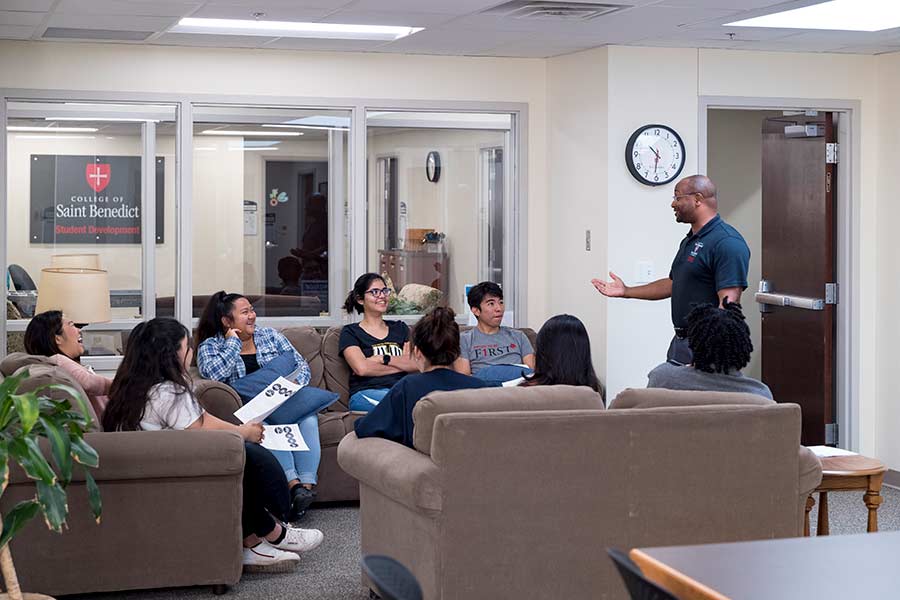 Brandyn Woodard, director of Intercultural and International Student Services at the College of Saint Benedict and Saint John’s University, has been hired to lead as vice president of equity and inclusion at Anoka-Ramsey Community College and Anoka Technical College. His last day at CSB/SJU will be Friday, Feb. 19.

Woodard came to CSB/SJU on July 1, 2013. Over the past seven-and-a-half years, he has been instrumental in creating a more inclusive, equitable and just Saint Ben’s and Saint John’s. In addition to his position as director of Intercultural and International Student Services, he has served as the student Human Rights Officer, as the coordinator of the Intercultural LEAD program, and as a co-administrator of Becoming Community, a $600,000 Mellon grant-funded initiative that seeks to implement transformative inclusion at the institutions.

Under Woodard’s leadership, diversity and equity programming at CSB/SJU blossomed, resulting in transformative learning for students, faculty and staff. Woodard planned robust and collaborative campus-wide programming, including the annual Festival of Cultures and integrated MLK-week programming celebrating the ideals of Martin Luther King, Jr. He developed and led training for faculty and staff to aid departments in creating diversity, equity, inclusion and justice plans. He has been a voice for inclusive hiring practices through the Search Advocate program, a facilitator for the Intercultural Development Inventory, and an advocate for restorative justice practices on campus.

Woodard’s impact has been deeply felt by students, particularly by BIPOC and international students who have formed relationships with him through his work. He has provided guidance and mentorship to scores of students during his tenure, and supported students during times of local, regional and national racial crisis.

“It has been a privilege to work alongside, and learn from, Brandyn Woodard. His student-centered approach to leadership reflects exactly the type of institutions we seek to be,” said CSB vice president of student development Mary Geller. “We are grateful for the ways Brandyn has contributed to the ongoing growth and transformation of our community.”

Woodard’s reach has been far and deep both on campus and in the greater St. Cloud community. He was active in planning St. Cloud’s Martin Luther King, Jr. celebrations, shared his expertise with Create CommUNITY, and co-led the Community Conversations Program.

“Brandyn will be missed by so many, but especially and most particularly by the students whom he loves to serve,” added SJU interim vice president of student development Mike Connolly. “We are delighted that he will have the opportunity to serve students in enhanced ways in his new position. We know his exceptional leadership will be transformative there as it has been at CSB/SJU.”

Vice presidents Geller and Connolly have been working with the CSB and SJU presidents to develop a transition plan for Intercultural and International Student Services. Malik Stewart, CSB development officer, will serve as interim director of IISS, overseeing the work of the office in the coming months. Stewart is well-prepared for the role, given his mentorship of students and alumnae/i and his involvement with Intercultural LEAD, admission, and institutional advancement.

Qiwei Zhang continues in her role as Assistant Director of IISS. Immigration and SEVIS-related services will be handled by the Center for Global Education at CSB/SJU. Support for BIPOC and Q+ students, clubs and organizations will be provided by Sydney Robinson, who will begin her role as CSB Intercultural and International Student Success Advocate on Monday, Feb. 1. Plans are underway to appoint her counterpart at SJU.

The presidents will announce a comprehensive plan for enhancing diversity, equity, inclusion and justice work at CSB/SJU in the coming days.