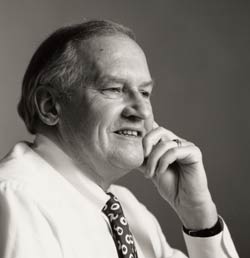 "John Brandl's accomplishments as educator, legislator and civic leader serve as a model for all of us," said Dan Whalen '70. "I can think of no better way to honor him than to encourage today's students to learn from his example through the John Brandl Scholars program."

Dan and Katharine Whalen have designated $1 million from their gift to the Eugene J. McCarthy Center for Public Policy & Civic Engagement to endow the John Brandl Scholars program.

Brandl  graduated cum laude from Saint John's and earned master's and doctorate degrees from Harvard University. He was Distinguished Professor of Public Policy at Saint John's University and professor and former dean of the Hubert H. Humphrey Institute of Public Affairs at the University of Minnesota. Brandl held positions at the federal level in the U.S. Office of the Secretary of Defense, Office of Economic Opportunity, the Economic Development Administration, and as Deputy Assistant Secretary, U. S. Department of Health, Education and Welfare. He served in the Minnesota Legislature for 12 years. In addition to faculty positions at alma maters Saint John's University and Harvard University, he held teaching positions at Boston College, the University of Wisconsin, the University of the Philippines and the University of Sydney. He served as president of several national and regional groups and received many civic honors and awards. Brandl was the author of numerous books, monographs, articles and reviews.

"Saint John's is like home to me." John Brandl when asked about the impact that Saint John's had on him.

To learn more about John Brandl in his own words read this interview from 1994.