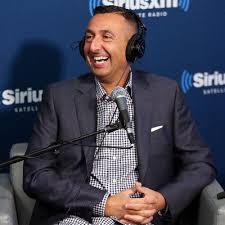 The Eugene J. McCarthy Center for Public Policy and Civic Engagement is thrilled to announce that this February, the 2019 McCarthy resident will be Lino Rulli '93, SOT '95.

Lino Rulli is currently the host of a popular afternoon drive radio show called "The Catholic Guy" on SiriusXM Satellite Radio Channel 129. Since his television career began in 1988, Rulli has found immense success as a host and executive producer for multiple Emmy winning programs.

Rulli was the co-executive producer of the World War II documentary, "The Last Flagraiser" which aired nationally on CBS and won the Emmy Award for Documentary, the Scripps-Howard National Journalism Award, the National Headliner Grant Award, and the RTNDA Edward R. Murrow Award.

From 1998-2004, Rulli acted as both executive producer and host of "Generation Cross" As host, he received two back-to-back Emmy Awards, making him the first person since Bishop Fulton Sheen to win an Emmy Award for Catholic broadcasting.

In addition to his success in media broadcasting, Rulli has written two books: Sinner: The Catholic Guy's Funny, Feeble Attempts to Be a Faithful Catholic in 2011, and Saint: Why I Should Be Canonized Right Away in 2013. He is also the Personal Media Advisor to Cardinal Timothy Dolan, who TIME Magazine named as one of the most influential people in the world.

Rulli is a distinguished alumnus from Saint John's University and Saint John's School of Theology and Seminary.

For an example of Lino Rulli's broadcasting work, check out his Catholic Guy episode at Saint John's University in which he interviews current Interim Director Bob Bell: