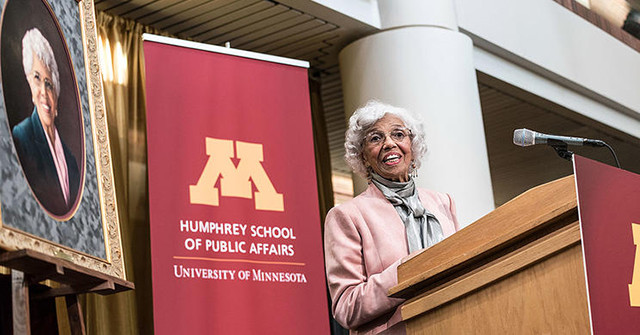 "Josie R. Johnson has always been a champion of fairness and decency, and this book shows us that while there is still work to be done, with her help, there will always be hope." —Walter Mondale

The Eugene J. McCarthy Center for Public Policy and Civic Engagement welcomed Dr. Josie Johnson virtually on October 21, 2021 for the McCarthy Residency at the College of Saint Benedict and Saint John’s University.

The McCarthy Residency showcases the work and skills of someone who has a distinguished career in public service, policy, or politics through a week-long on-campus residency. The primary purpose of the residency is to give students extended access to someone with real knowledge and wisdom about policy, civic engagement, and public life.

Born in 1930 in the racially divided South, Johnson’s childhood in Texas was deeply impacted by her experiences with racism, prejudice, and injustice. At the age of 14, she recalls accompanying her father to collect signatures in opposition to a poll tax.

In 1956, Johnson moved to Minnesota and immediately began fighting to dismantle systematic racism and advance civil rights through her involvement with the League of Women Voters, NAACP, Minneapolis Urban League, and Democratic Farmer-Labor Party.

Through her career fighting for the advancement of racial equity, Johnson became an expert lobbyer. She quickly earned a reputation as a tenacious fighter for justice with values grounded in love and grace.

Johnson’s illustrious career has featured roles as the first black woman on the University of Minnesota’s Board of Regents, Co-Chair of the African American DFL Caucus in Minnesota, and superdelegate from Minnesota during the 2008 Democratic National Convention.

Johnson’s recently released book, Hope in the Struggle, chronicles her struggle for the advancement of civil rights in Minnesota and offers keen insight into the life of a truly inspiring leader.

Hope in the Struggle: A Conversation with Josie Johnson

Dr. Ken Jones, History, will interview Dr. Johnson about her life’s work in advocating for civil rights and her hope for future leaders. Dr. Josie Johnson’s recently released memoir chronicles her struggle for the advancement of civil rights in America—and, specifically, in Minnesota, and offers keen insight into the life of a truly inspiring leader.

Her memoir offers a close-up picture of the struggle that has entailed working as a community organizer, lobbying for fair housing and employment laws, co-chairing the Minnesota delegation to the March on Washington, becoming the first African American to serve on the University of Minnesota’s Board of Regents. This event is sponsored by the Eugene J. McCarthy Center with additional support from the Global Business Leadership Department, Andersen Corporation, the History Department, the Honors Program and the Political Science Department. 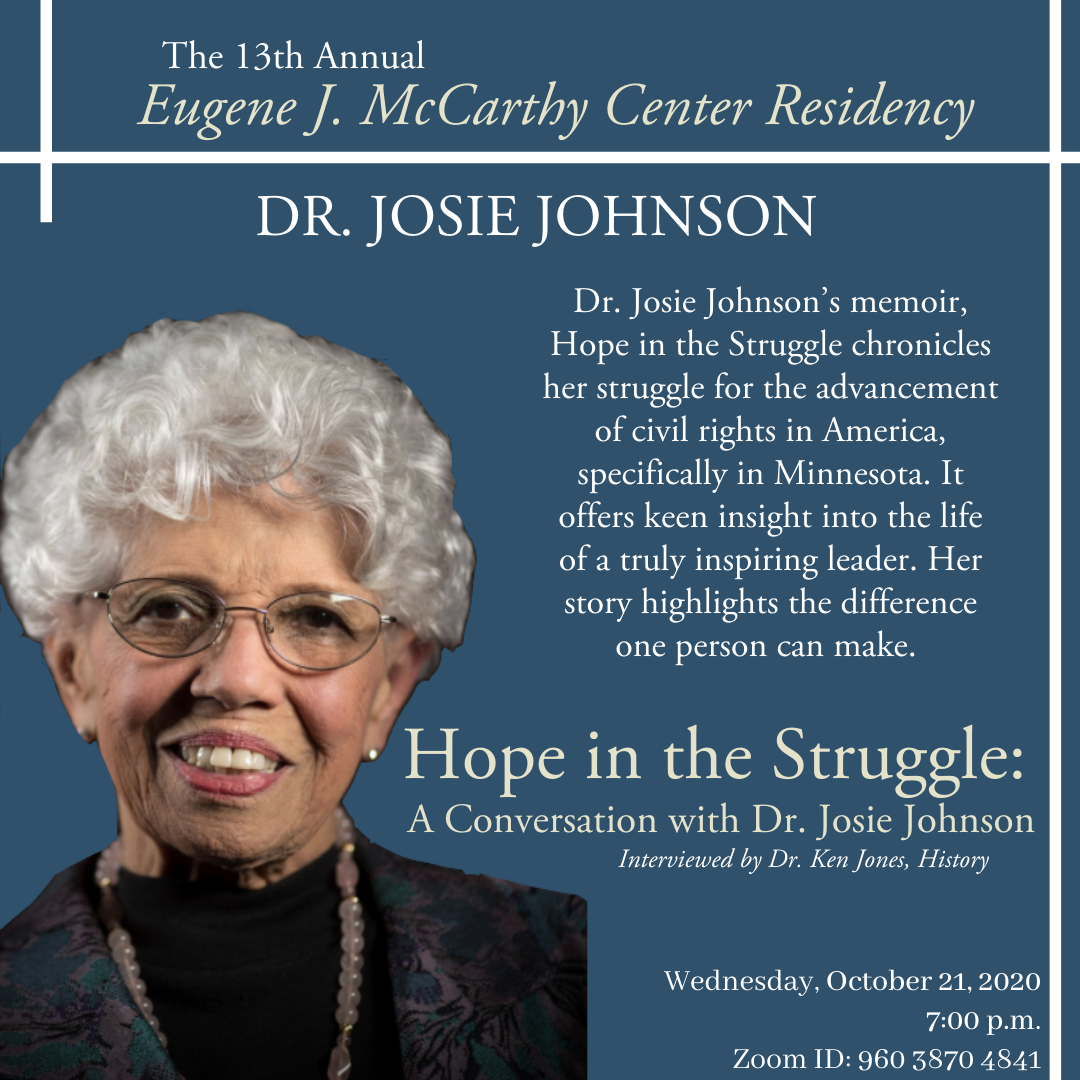 Hope in the Struggle Book Club

Students, faculty, staff and community members are encouraged to join Dr. Deborah Pembleton and Dr. Jonathan Nash for a book club on Hope in the Struggle leading to Johnson’s residency.

"Johnson tells the city’s history, from the early 1950s until now, by placing its tiny but vibrant black community at the center. This is a memoir of Minneapolis. That it is told by an African-American woman makes it rare and necessary. That she is not afraid to identify and call out the ways in which white supremacy excluded black people from their full rights as Minnesotans—from exclusionary housing covenants to employment discrimination—is important. It’s a book that might help newcomers understand the city’s racial history and one that long-timers might find revelatory." —Star Tribune