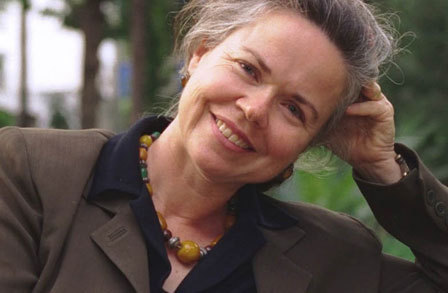 "Susan Stewart may be our best contemporary thinker on poetry. . . she writes criticism with the grace of a poet, and poetry with a strong logos underlying its lyrical surface. Both are haunted by a feel for our unknowable, primordial being, and this is no doubt what gives her work its abyssal power." Ange Mlinko | Los Angeles Review of Books

Susan Stewart is a poet and critic, Avalon Foundation Professor in the Humanities at Princeton University and former chancellor of the American Academy of Poets. She has published several collections of poetry, such as Yellow Stars and Ice (1981), The Hive (1987), The Forest (1995), Columbarium (2003), and Red Rover (2008), as well as books of criticism, including Poetry and the Fate of Senses (2001) and The Poet's Freedom: A Notebook on Making (2011). Her most recent collection Cinder: New and Selected Poems (2017) is this year's recipient of the Sister Mariella Gable Award.

"It's always the moment of encounter - with natural object, with people, with works of art - that raises the subject-object problem and poses the question of what we can know." Randall Couch | Jacket2  Couch's review "On the art of Susan Stewart" perfectly introduces new readers to her work, both as a poet and as a critic. He suggests that the critical and creative aspects of her work function as two souls, in fact, nourished by her deep process of philosophical thinking. Her mysterious style has earned her admirers such as poets John Kinsella and Allen Grossmann.While her writing is introspective and philosophical, Stewart powerfully grabs the attention of the reader, and succeeds in convincing that, after all, poetry is easy.

Stewart also has a deep interest in the arts: she collaborated with composer James Primosch (Dark the Star, Songs for Adam) as well as with visual artist Ann Hamilton (RECTO/VERSO) and with Italian painter Sandro Chia (Pittura e Poesia, exhibition held in 2009 in Capalbio, Italy). A collection of her essay on arts, titled The Open Studio: Essays in Art and Aesthetics, has been published in 2004.

Stewart co-translated Euripides' Andromache with Wesley Smith. She has translated Italian authors such as Alda Merini, Patrizia Cavalli and the painter Scipione (both with Brunella Antomarini), Laudomia Bonanni (with Sara Teardo), and Milo de Angelis (with Patrizio Ceccagnoli).  Her works have been translated into Italian, Spanish, German, Japanese and Chinese.