Excerpt from The Weatherman 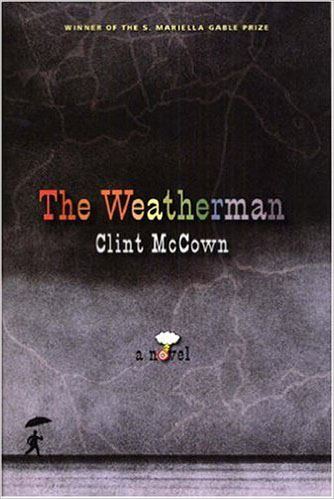 I know some things about spiders. For example, I know that spiders are more closely related to crabs than to insects. I know that the water spider spins its web underwater, then collects air bubbles on its body hairs and carries them down to inflate its next like a silk balloon. I know that some spiders in South America are so big they eat hummingbirds. I know that strands of spider silk are used for the crosshairs of telescopic gun sights.

None of this information has ever done me any good.

That’s the problem with most information. It’s easy to learn the facts, hard to find a use for them. Still, I scan the catalogue in my brain, ransacking the files for what I know. My reason, in this case, is purely practical. Right now there’s a surprisingly large Mesothelae Antrodiaetidae on the ceiling directly about my hospital bed. I know the markings: the hair on the cephalothorax is dark chestnut brown, the abdomen more purplish. He’s almost two inches long – maybe thee, counting the legs. The Mesothelae Antrodiaetidae is classified as an atypical tarantula and is the biggest of the trapdoor spiders. They’re relatively common in this part of Alabama, but not on ceilings. Never on ceilings. They aren’t good climbers – their bodies are too heavy and their legs too short. So even though I know perfectly well what spider I’m looking at, I can’t explain how he got there. All I can do is lie here and watch him. And wait for him to fall.

Or her – wait for her to fall.

It’s hard to put a time frame on a thing like that, even for me, and predictions are supposed to be my business. For the last month I’ve been the weatherman for the Alacast Network – that’s sixty-seven stations statewide plus Channel 11 in Montgomery – and even though I fell into the job more or less by accident, with no background in meteorology whatsoever, I’ve nevertheless learned to read a few signs along the way. I know what sorts of things can tumble from the clear blue, things more complicated than rain, or sleet, or hail. Basic precipitation is comparatively easy to foresee because it’s always based on movement. One front pounds another, and something drops from the sky. Simple. But spiders have a different meteorology, and even though I’ve watched this one for hours, I still don’t have any clues. He doesn’t move.

No, on second thought, not she, not her, not any form of the feminine. She is too disturbing to think about right now, even with medication smoothing the wrinkles in my veins. She is an indecipherable notion. She with chestnut hair.

The Scottish hero Robert Bruce said he learned perseverance by watching a spider try over and over to fasten a thread to a branch. Maybe there’s a lesson in my spider, too. But I don’t see it.

Here’s a blunt fact: a male tarantula might string together ten lifetimes and still not outlive the female. The reason is obvious: nature has made males the more expendable. Some are even killed by the female.

Nature’s not infallible, though, and sometimes the female goes first. My mother, for example, disappeared from the scene before my father, though the particulars remain hazy. She left a note, but she wasn’t a very good writer. In any case, my father never saw her again, and he proceeded to play out his final years of good health swearing his way around the golf course, slathered in suntan lotion and decked out like an arcade attraction in flammable polyesters.

A rope of spider silk an inch think could support seventy-four tons – the equivalent of a locomotive and three overfilled coal cars. But if you put enough spiders together to make that much silk, they’d eat each other. Spiders have no concept of community. No family loyalties.

Most spiders have eight eyes.

Usually if a spider doesn’t move it’s because he’s waiting for some careless passerby to make a last mistake, waiting for the tremor in the web that means another bundle for the pantry. But this spider has no web. He’s the only dark disruption in a hundred square feet of smooth, white plaster. That’s a poor tactic for a hunter, no matter how still he keeps. A spider without subtlety is a go-hungry spider, and there’s no subtlety at all in this spider’s position.

Maybe he’s asleep, although it’s hard for me to think of spiders sleeping. I guess they must. Everything sleeps. The tree frogs I hear singing in the palms each night are sleeping now. The crickets, too, most likely, are napping down in the cool coils of the radiator. The chameleon that strained all morning to become transparent on the windowpane is dozing now. Everything around here sleeps.

I could be wrong, of course; he could be wide awake, watching me with a cold, professional, eye, wondering what giant after his own heart has snared me in this web of tubes and straps and bandages. Maybe he’s waiting to scavenge leftovers.

It’s too soon to worry, though. Before a tarantula bites, it gives out a warning by kicking itself a few times in the abdomen. That’s one thing that separates it from politicians.

I do know something of politicians, having studied them far more closely than I ever studied the weather. For the past few weeks I’ve hovered above them in the visitors’ gallery at the capitol building, watching them play out of the formalities of their game. I wish I could have been there for today’s session. The whole legislature must be in turmoil now, wondering how to untangle the calamity of the election. I tried to warn them. Night after night I predicted radical disturbances in the atmosphere. I mentioned whirlwinds, earthquakes, massive upheavals. My long-term forecast called for asteroids.

But that was before the wide-eyed look of disbelief on the assistant general’s face. Before the pulling of the trigger. And I have to admit I’ve seen nothing but good signs from that moment on. Cool fronts are warming up, warm fronts are cooling down. The rainbows refracting through my drinking glass seem more prophetic than the chips along its rim.

If Alissa were here I would hazard a forecast.

But no. Forecast implies a specific sense of the future. Even though Alissa believes in predestination, her moves are unpredictable.

Instead I have Shawnelle, the day nurse. She comes from the city side of the bay, but moved over here among the mimosas to live more quietly. She is meticulously slow – not like those pert candy-stripers who flit in and out like this is Disneyland, but slow and graceful. She is an intuitive danseuse who makes no thoughtless gesture. Even when her black hair drapes forward across her shoulders as she leans down to take my temperature, even then I think she knows where every strand will fall.

“You’ll be just fine, Mr. Wakefield,” she tells me, and except for the burn spots on my soul, she may be right. I think we’re about the same age. I’m sure she’s under thirty. I’ve told her to call me Taylor, but she won’t do it.

I wonder what it was like for her fifteen years ago when federal troops patrolled the streets in green jeeps and camouflaged trucks. Maybe she carries some kind of hurt from back then. I know I do.

She says she thinks sometimes about leaving the state, trying life up north somewhere, but I doubt she’ll ever go. Her pace is perfect here. Hers is the pulse of the region. This is the land for Shawnelles, for slow movers and syrupy talkers, for the methodical, the patient, the unconcerned. On days that crack the fields she moves without sweating. As the air thickens and shimmers in waves, she breathes it best. When katydids whir among the drowsy willows, she sips a glass of tea and rests her eyes in the afternoon shade. That’s what I imagine, anyway.

She has nice eyes. They’re green, a living green the color of a stained-glass pasture on the sundown side of church. They shine more as the day wears on and come to brilliance near the shimmer of evening, during the shadow-gathering calm that follows the administering of the Demerol.

Demerol is a drug of detachment, which is perfect for me now. It doesn’t take the pain away, but keeps me from caring about it. They gave me a hundred cc’s for the operation, and if my arms hadn’t been strapped to metal gurneys I might have sat up and watched. I could see some of it anyway. The doctors made a few quick cuts, stuck on some clamps, and suddenly my hand was inside out. I could feel the whole procedure – the removal of the fragments, the restitching of the muscles, the resetting of the remaining bones – and it never even occurred to me to flinch. He could have sawed off my arm and I would have found it entertaining.

That, too, makes me think of Alissa.