Excerpt from One Vacant Chair 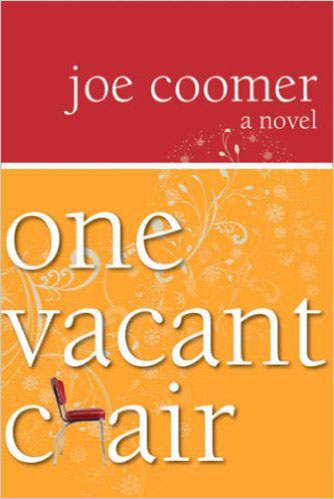 Perhaps our lives are sustained by a suspense of dying. There are things I know and things I don’t know and everything else is in between. Grandma Hutton called Aunt Edna to her deathbed and then decided to linger for twenty-two years. She measured her life with spoons, the brimming spoons of medicine or milk or soup that my aunt balanced with a painter’s sure grip over her own cupped palm, her free hand mimicking in form and movement the dull spoon’s bowl, her arm the narrow handle. My grandmother, for the last few years of her life, answered the telephone as if she were standing at the mouth of a dark cave, halooing for a lost soul. When someone answered she was always taken aback. That’s how we talked to her at last, by phone, everyone but Aunt Edna. Then the family returned to Fort Worth for the funeral like separate drops of condensing water pooling in the bowl of a cold spoon, a last offering to an old dead woman none of us cared for. That’s not true. Aunt Edna missed her.

We began by carrying the chairs out to the vacant lot next to the house. The old house was full of chairs, to the exclusion of almost all other furniture. This was my aunt Edna’s collection.

“It’s one thing men are good for,” she said, shooing them away from the Saran-Wrapped food, “carrying chairs.” She pulled a cane-seated, ladder-backed chair away from the kitchen table, thrust it into my husband’s arms, and said, “Out to the vacant lot. Everybody pick up a chair. I want evenly spaced rows with the chairs facing west so Brother Roberts is looking into the sun.” Then she looked at me. “Sarah, you help me with Momma’s chair. We’ll put it up front next to the preacher and put her in it.”

“You could leave it empty,” my husband said. “It would be like one of those missing-pilot-formation flyovers.”

It bothered me that I still thought Sam was funny. Someone you didn’t respect shouldn’t be able to make you smile.

Grandma’s chair was overstuffed, rotund, a depression-era lounge chair covered in pale green mohair. It was some work to get it out of the bedroom, through the hallway and outside onto the porch, where we sat it back down to rest.

“There’s no good place to grab it,” I huffed.

“We should brush it off while it’s outside. There’s cat hair on the backside.”

“It crossed Momma that her favorite chair was the cat’s favorite chair, too. She’d hold her forearms up in the air after she sat down till I came and brushed the hair from the nap. I’d tell her the cat only sat in her chair because he loved her but the cat and I knew that was a lie.”

“What happened to your cat, Aunt Edna?”

“Oh, I gave him up, gave him to a friend. He was a good kitty, too. He always sat in the light, just like a model should.”

“Grandma made you give him up.”

“Well, she was sneezing, sort of between sniffing and sneezing. She didn’t make me.”

“Was there ever any snot on her Kleenex, Aunt Edna?”

“You can get that cat back now.”

“Oh, that cat’s long dead. This hair here’s the last of him.”

Chairs moved past us in my family’s arms, more than twenty chairs from the living room alone: Windsors, Empire, Colonial, Victorian, Edwardian, Arts and Crafts, Art Deco, chairs from every period, none alike, no pairs, much less a full set. The dining-room table was surrounded by eight chairs that were separated by two hundred years in the making, not to mention the variety of style, seat covering, and finish. Whenever we sat down for a meal, everyone was at a different level, children likely to be as tall as their parents, full-grown men with their chins resting on their plates. There were chairs where end tables should have been, chairs where cabinets and hampers should have been, chairs sitting inside dark closets, chairs hanging upside down on the walls. The television sat on a chair, as well as the microwave, a room fan, and a fish bowl. They all left the house one by one and were set in rows in the Saint Augustine grass, so that the vacant lot came to resemble an outdoor theater crossed with a yard sale. Aunt Edna and I sat Grandma’s chair next to a tall oak stool that was reserved not for Brother Roberts to sit on, but to stand behind and rest his book on.

“Should we have a pitcher of water for him?” I asked.

“Well, I hope the sun in his eyes will keep him from talking too long, but if he bears up to it he might need some water. I’ll bring over a little chair to set the water on. Now, which of these chairs would accept a glass of water?” She turned to the growing audience of empty chairs, and said, “You.” Four rows back, on the groom’s side, was a white wicker corner chair, low, with a rather unstable seat. It took her a full minute to balance the glass on the uneven reeds. “Now,” she said, “if he stops in the middle of his speech for a drink he’ll have to down it in one gulp. It will be too bothersome to set a half-full glass of water upright in this chair during a sermon. We don’t want any of this talk awhile, take a sip, talk some more, have a sip, business.”

“Doesn’t that wicker make the water seem cool and inviting? Don’t stomp on the ground as you pass by.”

I followed her back into the house, which would now be her house, I supposed, and found it virtually empty. There were beds and dressers in the two bedrooms, and a table and sideboard in the dining room, but the remainder of the house seemed almost littered. Under the twelve-foot ceilings, lying on the oak floors, was everything that had been held in the chairs: books, clothing, toiletries, magazines, knick-knacks, dishes, photographs, and telephones. In my aunt’s room all her paints and brushes were shoved into a corner and they, in turn, held pinned to the wall sheaves of watercolor papers and sketchbooks. Aunt Edna’s favorite chair, a 1950s kitchen chair, chrome tubing supporting a thin red vinyl seat and back, was the only chair left in the house. No one was brave enough to remove the dozens of open medicine bottles stacked precariously on its seat. She swept them all into a box in one movement. The vinyl of the seat cushion had split, like a ripe tomato left in the sun too long. The back rest sported a gray Band-Aid of duct tape, as if a tomato could be repaired. Once she carried her chair outside, the house was empty of chairs, and yet still full of them.

Every chair we’d carried out was still there. Aunt Edna’s chairs were simply her models. Every wall in the house was hung with sketches, watercolors, and paintings of chairs: simple pencil studies of foliate carvings on knees or stenciled crest rails, watercolors of single chairs in a meadow or parking lot, a flight of chairs winging through deep grass, an oil portrait of a stodgy banister-back paired with a low, bow-backed Windsor that had to have been influenced by Grant Wood’s American Gothic. She’d continued to paint since I’d left Fort Worth twenty-six years earlier, since everyone had left, and she was still painting chairs and only chairs. It seems odd now to write it down, that she only painted chairs, but at the time no one in the family remarked upon it much. Aunt Edna liked to draw and paint chairs in the same way that my father liked to read books about the Civil War, or Aunt Margaret liked to play charades. I think it only seems eccentric now, now that her paintings have become important to people outside the family. Maybe we were wrong not to notice. The fact that her house was full of chairs was more interesting than it being full of chair paintings. The reviews use words like “compulsive” and “addicted” and “driven,” but we only knew she loved chairs. Caring for Grandma and her job at the elementary school seemed the biggest part of her life. These people who now care about her art look at all of us in a dumbfounded way when we can’t provide more details about her life, about her passion.