Charles Lindbergh, the first pilot to make the trans-Atlantic flight from New York to Paris in 1927, isn’t the only Little Falls, Minnesota native who felt compelled to journey to France. 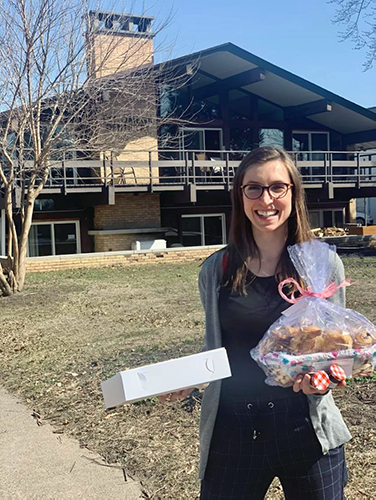 Chelsea Rutz (’17) ventured to France as well, after graduating from the College of Saint Benedict. She participated in the Teaching Assistant Program in France (TAPIF) in 2018-19. During that year the bakeries on every street corner sparked a passion for French baking.

Though Rutz majored in economics and still works in that field, her focus has switched to baking. She opened her own online bakery, Suga Maman Bakery, which delivers within a 30-mile radius of Little Falls.

Rutz specializes in French breads and pastries, and her favorites to make are chocolatines (chocolate croissants) and cannelés bordelaise (roughly defined as a cinnamon pudding pastry). She first fell in love with French culture and baking while visiting the country during a break in her college study abroad program in Austria.

“Upon return to the U.S., I took my very first French course at Saint Ben's - that's when I fell in love with the language as well. I am grateful for having the encouragement from the language professors to pursue my dream. The TAPIF program afforded me the opportunity to do just that - return to France,” Rutz said.

Rutz taught in the Southwest of France at Collège Max Bramerie (equivalent to middle school in the U.S.) for about eight months. She had always enjoyed baking before her time in France, but her experience with the TAPIF program solidified her love of baking in the French style.

That passion was amplified when she was in France and sampling the finest pastries.

“Through the TAPIF program, there is additional time outside of teaching to explore interests. I thought, ‘Why not explore some recipes on my own?’ After experimentation, I brought them to the collège for colleagues to sample and also shared with French friends to offer their opinions.”

Rutz believes that the CSB/Saint John’s University Department of Languages and Cultures was crucial in developing her passion for the French language and culture, as well as preparing her to live abroad.

“Every language class I took was engaging, and language professors elaborated on the historical and cultural context of what we were learning. Outside of class, there were always options for exercising language skills even more, such as the annual French Film Festival and tutor sessions,” Rutz said.

After her time in France, Rutz returned to the U.S. to work in the Twin Cities as a proposal and request for proposal writer for a benefits administration company, Benefit Resource, LLC (BRI). When the pandemic began, Rutz was able to work remotely and return to Little Falls. The adjustment back to the U.S. wasn’t easy, so she channeled her energy into her love of French baking.

Opening her own online bakery was an easy decision, as it combines her passions for business and baking. So far, Rutz’s bakery has been a huge success, and she loves seeing the expressions on her customers’ faces when she delivers a basket. Though Suga Maman Bakery is starting out small and Rutz is still working at her day job, she has big plans for the future.

“In the long-term, I would love to switch to baking full time and run a commercial bakery.” 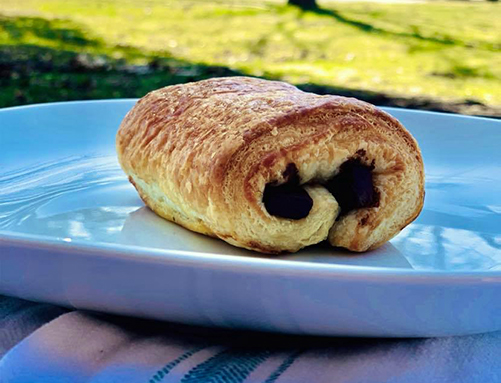