View a PowerPoint of pictures of Polasky in West Africa.

Who would guess that a degree in Environmental Studies could lead someone from the frigid temperatures of Juneau, Alaska, to the blistering heat of Ghana, West Africa? Add a stop at College of Saint Benedict in Saint Joseph, Minn, and you have a very basic outline for Sophia Polasky’s journey, if you throw in a few study abroad trips to El Salvador, China, New Zealand and Brazil. 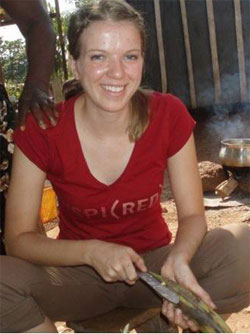 Polasky, a CSB graduate from the class of ’06, has spent the past 15 months living in a house built by Habitat for Humanity International and volunteering with the Environment Sector of the Peace Corps in Ghana. Her job is to assist habitat homeowners with “Alternative Livelihood Projects,” otherwise known as ALPs.

“ALPs are basically agricultural endeavors designed to increase and stabilize incomes among small subsistence farmers,” Polasky explained via e-mail. “Thus far my big projects have been to work with individuals desiring to construct and sell their own solar panels, and assist jatropha (a crop used to produce bio-diesel) farmers in exporting their crops.”

Other aspects of ALPs range from animal husbandry to specialized crop production, along with the promotion of alternative energy production and the introduction of the permaculture techniques in agriculture.

In addition, Polasky busies herself with establishing a community library and HIV education in local schools.

Along with her Environmental Studies degree, Polasky minored in Classical Greek at CSB, a move that surprised many people.

“I have found that the interdisciplinary nature of the Environmental Studies major has enabled me to participate more fully in my life as a volunteer,” she said. “However, if that gave me the tools to analyze and dig into the problems facing humanity, Greek gave me the capacity to better contemplate what it means to be human.”

Polasky recalls her time spent at the College of Saint Benedict and Saint John’s University with gratitude. Though she misses her experiences on campus, she feels as though she’s carried those experiences with her and that they have enriched her life.

After the Peace Corps, Polasky is considering pursuing a graduate degree in journalism or maybe a potential masters in Environmental Studies.

“At this point, I’m still deciding, but there’s excitement standing on another threshold,” she concluded. “Above all else, I am grateful for the foundation on which I stand.”