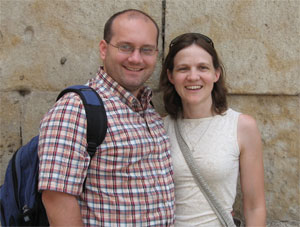 Saint John’s University graduate Joshua Thoms ’97, had experienced life abroad prior to his time at the College of Saint Benedict and SJU. But as a Spanish major, his travels furthered his intellectual growth.

In the fall of 1995, his experience in Spain traveling and studying with other CSB/SJU students unlocked the door to a world of education and service.

"Being immersed in and exposed to the diverse cultures found throughout Spain, coupled with the opportunity to practice and improve my speaking ability with my host family, proved to be very memorable experiences for me," Thoms said. "Those who participated in our study abroad group have become good friends and many try to stay in touch yet today."

His experience abroad also allowed him to become better acquainted with a CSB student named Becky (Heidelberger) Thoms, '97, the woman who later became his wife on Sept. 18, 1999.

In addition to his study abroad experience, Thoms said that José Fábres, associate professor and chair of the department of Hispanic Studies, also played an influential role in his SJU experience.

"José was a dedicated instructor and scholar whose classes were always challenging but extremely rewarding," he said. "I am thankful for his mentorship and also his good sense of humor."

After graduation, Thoms continued to explore the world by volunteering at an orphanage in Mexico with a fellow SJU student.

"We spent nine months living and teaching at a residential school in rural Mexico," he said. "I then returned to the U.S. that following year and found a job teaching Spanish at Sibley East High School in Arlington, Minn."

After teaching in Arlington, Thoms obtained his master's degree in Spanish Literature in 2003. He is currently pursuing his doctorate in second language acquisition at The University of Iowa.

And because of the rewarding experiences he had while at CSB/SJU, Thoms has also continued to travel and serve.

"CSB/SJU has instilled in me a sense of living life to the fullest — learning as much as you can each day and sharing that knowledge while in service to others," Thoms said.

He traveled to Honduras and served as a translator for a team of doctors from Rochester's Mayo Clinic on a medical mission and also spent time in Paraguay studying bilingualism (Guaraní and Spanish) while participating in a Fulbright group project abroad seminar.

Recently, Thoms was able to return to Spain to deliver papers at two different academic conferences. He is currently working on his dissertation and hopes to develop a Spanish writing center Web site for the Spanish and Portuguese department at Iowa.

"I have very fond memories of the people and places that make up CSB/SJU. The relationship between the two institutions is unique and allows students to gain a quality education while offering the opportunity to build relationships that last a lifetime. I feel lucky to have studied there and am proud to be a Johnnie," he said.