From my dad (a third-generation stonemason) and mom (a nurse’s aid), I learned to love labor and the outdoors and that one’s faith in and commitment to education is well placed. As a result, I attended a Jesuit high school (St. Louis University High School), a liberal arts college (Macalester College), and a public university (University of California, Berkeley), experiences that shaped the rest of my life, leading me to love the practice of curiosity, discovery, and creation, and to want to be a dedicated and effective teacher more than anything else. In this role, I try to teach as my teachers did: to listen to all students, help them to fully recognize how amazing they are, and create learning experiences that change the way they see the world and themselves, make that world bigger in every way, and prepare them for a future of meaning, leadership, and success (broadly defined).

I discovered Classics between my first and second years at Macalester. I wanted to study a subject that opened more doors than closed them. I loved that Classics was interdisciplinary and that a Classics major allowed me to do serious work in multiple fields: language, literature, history, politics, religion, philosophy, art, archaeology, even geology (you have to know the earth you are excavating!). I watched Classics students graduate, going on to careers in teaching, law, medicine, and business. They were super smart, creative, successful—and fun. They loved what they were studying. I wanted to love what I was studying! Applying all those fields to the ancient Mediterranean and Middle East was fascinating. In that world, I encountered so many of the questions we face today. What is necessary for a successful community? Where do we see inclusion and exclusion—and why? What does justice look like and where do systems of justice breakdown? What possibilities does cultural diversity offer us? How can human beings change and grow? How can I change and grow? The list goes on. The Classical world became a familiar, yet strange world, in which I grappled with questions that matter and gained perspective that equipped me for the modern moment.

I am an ancient historian and archaeologist with interests in the Greek, Roman, and Near Eastern worlds. As an historian, my publications explore the relationship between ancient Rome and Iran. A former Getty Scholar at the Getty Research Institute and Villa, I published Rome, Parthia, and the Politics of Peace: The Origins of War in the Ancient Middle East (Routledge Press, 2020), exploring what rules governed the peace enjoyed and conflict suffered by Rome and its Iranian neighbor Parthia. As Co-Director of the Omrit Settlement Excavation Project in Israel, I am at work with my colleagues on publishing the results of our excavation of a Roman community at an important crossroads bordering Galilee and Ituraea. Finally, as a public scholar and contributor to the Avon Hills Salon, I explore the many ways the ancient world remains relevant in the modern day.

I love teaching all levels of Greek and Latin language and literature, including works by some of the greatest poets, historians, biographers, novelists, orators, and theologians of all time. In addition, I love teaching history and archaeology courses on Greece, Rome, Israel, and Egypt. Examples include: Classics 130: Introduction to Archaeology, Classics 230: Sword and Scroll: Violence and Cultural Exchanges in Antiquity, Classics 330: Parties and Wars: Greece in the Classical Period, Classics 377A: Roman Empire, and Classics 379: Grand Strategy. 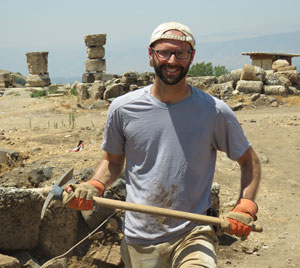