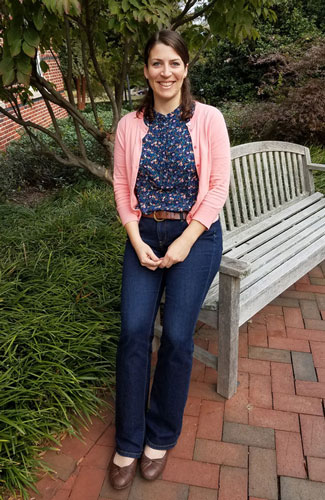 Since growing up in a small, rural town in southeastern Minnesota, Brooke Kreitinger ’01 has opened a world of opportunity.

After graduating from the College of Saint Benedict with degrees in German and French, the Stewartville, Minnesota, native spent two years in Austria teaching English in secondary schools through a Fulbright scholarship.

“After being immersed in the German language and Austrian culture for two years, I knew I wanted to pursue a Ph.D. in German studies and eventually teach German language, literature and culture at the college level,” she says.

In fall of 2012, Brooke earned a Ph.D. in German studies at Georgetown University and began teaching at the University of North Carolina at Greensboro (UNCG) soon after.

“My education at Saint Ben’s and Saint John’s directly influences my work, because for me it is so very important to be the type of dedicated, inspiring educator that I valued so greatly at a small, liberal arts college,” Brooke says.

In mid-November, Brooke was one of three educators nationwide to receive the 2016 German Embassy Teacher of Excellence Award by the American Association of Teachers of German (AATG).

“I am truly grateful and honored for the recognition of my work, particularly as I think of all of the talented, creative, and hard-working colleagues I have had the opportunity to learn from and work with and who are also deserving of this award,” she says.

The award recognizes excellence in teaching, creativity, dedication and enthusiasm for the German language, and the prize includes a two-week professional development course in Germany.

“Teaching is an undervalued profession in general and the importance of teaching foreign languages in particular is questioned by many because English is spoken widely around the world,” Brooke says.

"It acknowledges the work we do in educating students to not only speak German but also develop essential skills in intercultural competence as well as writing and speaking – skills which will prepare them well for many professions at home and abroad,” she says.

As a visiting assistant professor of German and director of undergraduate studies in German at UNCG, Brooke appreciates the opportunity to work with a diverse student body. She has been able to grow as an educator through teaching a variety of general education courses and bringing her research on contemporary German literature and film into the classroom.

“Although I am at a large public university, I still make every effort to focus on the diverse backgrounds, needs and goals of my individual students,” she says. “On the day-to-day level, this translates to hands-on, student-centered lessons that enable my students to engage in topics more deeply and to learn to communicate more effectively in writing and orally whether in German courses or courses I teach in English.”

Looking back, Brooke’s experience abroad and at home has come full circle.

“The close mentoring relationships with (CSB/SJU) faculty empowered me to pursue my academic interests and develop new intellectual passions, which compelled me to study abroad in both Austria and France,” she says. “Now I can open up new worlds to my students by empowering them to develop the language and intercultural skills needed and the motivation to go abroad and experience a German-speaking country firsthand.”