With a strong focus and interest in German he majored in management and German at CSB/SJU. 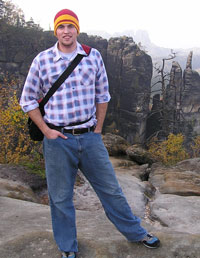 “By majoring in German I have developed a set of critical thinking skills that have enabled me to achieve major successes in my professional life,” Schnese said.

Schnese was mostly influenced by his time spent in the Modern and Classical Languages Department while at CSB/SJU. He acquired a tutoring/office worker position in the MCL Department his freshman year, developing many relationships with faculty and staff. In 2004, he received the Student Employee of the Year.

“I’ve used the tools the MCL has given me in every facet of my life since graduation,” Schnese said.

During his time at CSB/SJU, he has learned family and community values through his relationships with students, faculty, and staff.

“CSB/SJU has the unique ability to pull people from diverse backgrounds into one community. They don’t just pull them into one group. They make them buy into the community and give them all something to lose,” Schnese said.

Acknowledging the language benefits and the assured acquisition of new experiences, Schnese decided to study abroad for a semester at the University of Salzburg in Austria. He immersed himself in the culture by living with a German-speaking roommate and joined the Salzburg Rugby Club comprised mostly of Austrians.

After graduating, Schnese had two things in mind: making a difference and paying off his student loans. While he is still working on the latter, he has begun to make a difference. Upon graduation, he became a Fulbright Scholar and headed to Luckau, Germany to teach and do research. The Fulbright Scholar Program aims to promote a mutual understanding between the people of the United States and the people of other countries of the world.

“It was really a wonderful display of mutual learning!” Schnese said.

After Germany, he was hired as Office Manager of the Twin Cities German Immersion School, a new school in St. Paul that promotes cultural understanding and strives to produce bilingual students by the eighth grade. Schnese is now a Senior Project Consultant at the Minnesota Department of Commerce to pursue his interest in local government and public administration. However, he still stays active in the German Immersion Education Foundation.

“Staying active in the foundation allowed me to continue to maintain and use my German while supporting a great cause,” Schnese said.

While being involved, staying proactive, and continuing to value and promote the community values he has learned at CSB/SJU, Schnese encourages students to learn a language and make a difference.

“Learning a language means learning to look at the world and people through eyes that are not your own,” Schnese said.