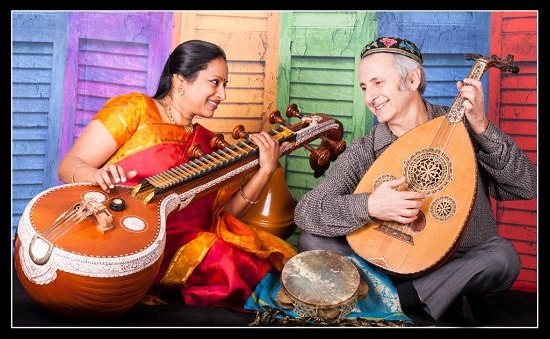 Cost
General: $30
Students: $20
Under 12: $15
*all tickets include dinner
Tickets may be purchased at www.hindumandirmn.org

Nirmala and David, inspired by the poetry of a thousand years in each of their traditions, probe the many facets of wonder as gateways to an illumined and impassioned life. Highlights of the concert include excerpts from the oldest extant piece of notated Jewish music; improvisational performances by Nirmala on the veena in both familiar and rare ragas (the melodic soundscapes of Indian music); ancient Tamil Sangam poetry; plangent Judeo-Spanish and Hebrew chants from traditional Jewish communities in Bosnia, Turkey, and Morocco; and new musical arrangements flowing from this evening's cross-cultural collaboration.

Nirmala Rajasekar has been featured in many world-renowned venues, including New York's Carnegie Hall, United Nations, Symphony Space; the Music Academy in Chennai, India; the Rumi International Festival in Konya, Turkey; and Musee Rietburg in Zurich, Switzerland. Nirmala made her debut as a solo performer on the 7-stringed veena at age 13 in Bangelore, India. Radio India has pronounced her a Grade A artist for All India Radio since 1990. Nirmala has performed in numerous collaborative settings with musicians from many backgrounds, including Western classical, Chinese, Indonesian gamelan, and jazz. She is the artistic director of the Naadha Rasa Center of Music based in Plymouth, where she teaches the art of Carnatic music.

Co-sposored with the Hindu Society of Minnesota