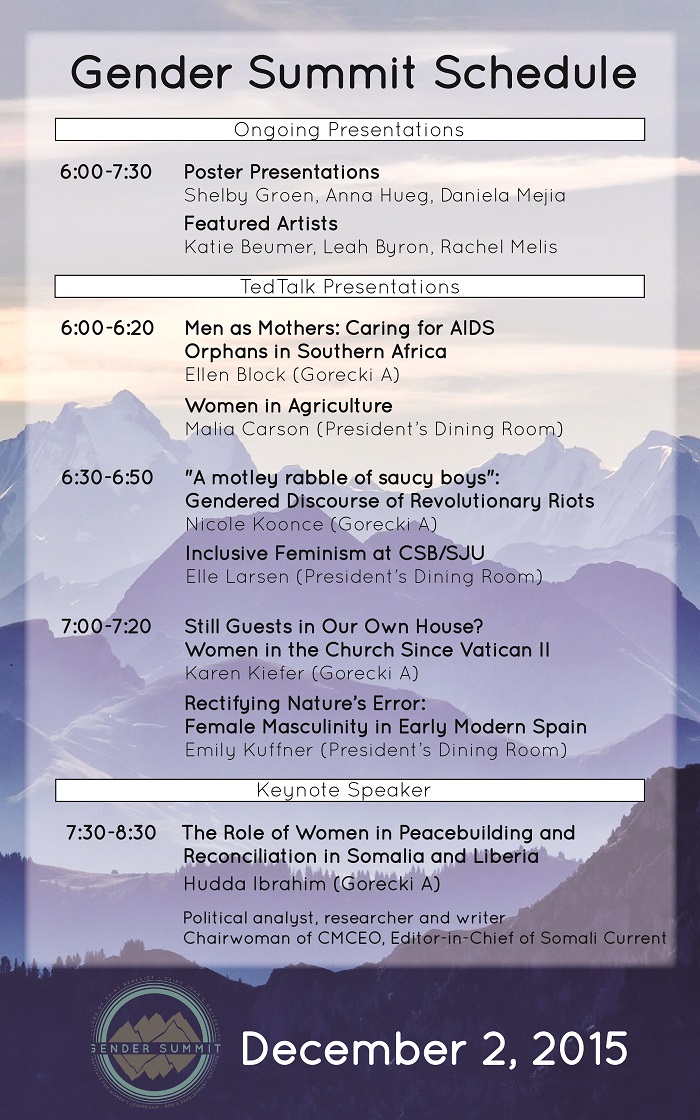 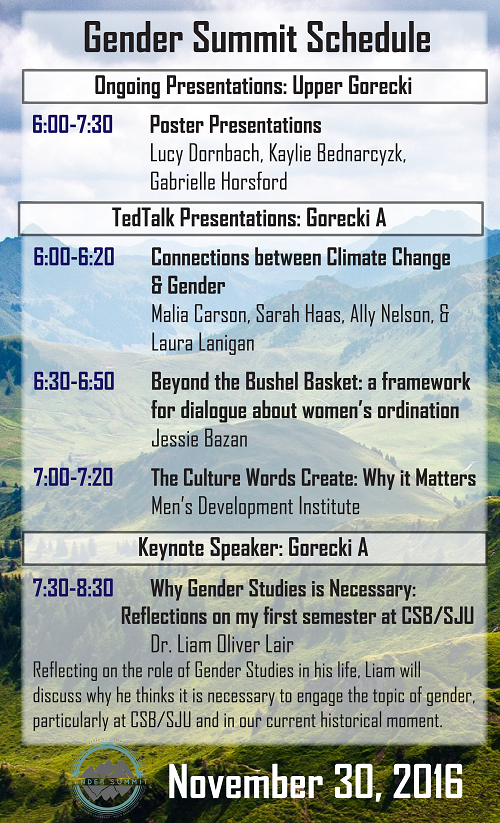 The Power of Pink and Blue Shelby Groen

Why are pink and blue gender specific colors? Shelby will present her sculpture that visually demonstrates the dynamic of pink and blue, pink representing girls and blue representing boys. The colors overlap and create a new color. This color does not cleanly fit into the pink or blue categories just as not all people cleanly fit into two categories.

Daniela Mejia Daniela will present a poster on reasons why women are not equal to men related to human rights. She will elaborate on women's experiences and different organizations that help women and children to be successful and strive for more.

Care for AIDS orphans in southern Africa usually focuses on the work of grandmothers. Yet, as fewer caregivers are available to provide care for orphaned children, men are increasingly stepping up to take on the role of primary caregiver. I will explore the possible resource that men represent as much-needed caregivers, as well as the strong gendered ideologies of care that lead them to be described as "like a mother".

Extending the Link, is a non-profit structured, CSB/SJU student founded, student run venture that makes documentary films regarding under reported global social justice issues and this year our team will be traveling to Rwanda to focus on women in agriculture. This presentation will discuss ETL's research on the effects/efforts of women in agriculture in Rwanda as  well as how women in our local community are currently involved in sustainable farming movements.

The patriots of the American Revolution are characterized as elite white men, despite the significant involvement of "ordinary people" in crowds and riots. This project examines the types of distinctions made between "patriot" and "rabble" in the various riots of Boston between 1747-1783.

This research was looking at what viewpoints are missing from feminism, as well as what issues need more attention from mainstream (non-academic) feminism. To make feminism more inclusive we need to give marginalized voices the chance to speak openly and be supported.

Still Guests in our Own House? Karen Kiefer (Gorecki A)

Fifty years since the Second Vatican Council issued groundbreaking documents on the church in the modern world the way the church engages women has remained vague and uncertain, and leaves many feeling like strangers in their own home. Pope Francis acknowledges the need to "ensure women feel they are not guests, but full participants in the various spheres of the life of society and the church."

Through the lens of love, mercy and power, this presentation deliberately engages the voice of women in the gospels and tradition and exhorts the magisterium to recognize and invite women in conversation to guide the church in these times and the centuries to come.

In this talk, Emily will examine performative gender theory as it pertains to the Renaissance. She will give an overview of how gender and biological sex were understood during the early modern period (16th-17th century), followed by an analysis of some examples from early modern Spain of biological women (historical and fictional) who declare that their gender identity does not conform to their body's sex. In doing so, she argue that understandings of both biological sex and gender identity were more fluid in the early modern period than the normative construction of gender and sex today.

Since the end of the Cold War, internal conflict flared up in many countries in Africa. Hostilities debilitated ways of human lives, shattered hopes of coexistence and security. Despite increasing violence against women in conflict, women stood up to carry out change in their male dominated political leadership.
The contribution and participation of women are significant to the success of the peace process because women represent half of the population. If half the population is deliberately excluded or absent from the decision-making table, achieving a viable peace will be impossible. Women, unlike men, bring different perspectives in the peacebuilding. They are mothers, sisters, wives, daughters, aunts and grandmothers. Women can act as a bridge between two communities fissured by conflict. They can bring pressure to bear on men to end conflict, encourage warring parties to brush aside their differences to build peace and restore their sundered relationship.

Hudda is a faculty member at Saint Cloud Technical and Community College where she teaches courses on Diversity and Social Justice, and is also an adviser to Foreign-born Students. She is the Chairwoman of CMCEO, and Editor-in-Chief of Somali Current Newspaper.