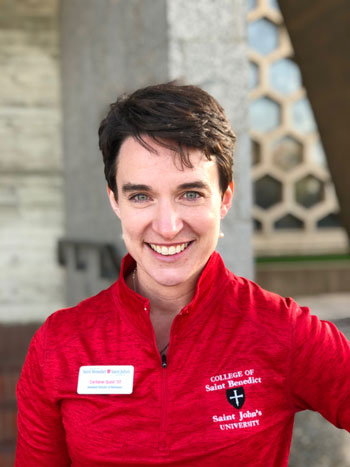 When you were looking at colleges, what made you decide on CSB/SJU?

Coming from a Catholic high school, I sought a similar Catholic identity in a college. I grew up in St. Cloud, and in high school I experienced a deep connection with Saint John’s through the Youth in Theology and Ministry program. I loved the campuses, the theology, the community that I felt during that summer camp, as well as during my campus tours. I wanted to play varsity ice hockey as well. But I didn’t want to be a “Central Minnesota girl”, going to school so close to home. Ultimately, I discovered that I could significantly expand my horizons by attending CSB/SJU – through living on campus, studying abroad, delving into the Spanish language and working with Spanish-speakers, and more. CSB/SJU felt like home.

How did you decide on a Hispanic Studies major? Did you come into your first year knowing that is what you wanted to study?

I learned from a wonderful Spanish teacher in high school, a woman who imbued in me a passion for the language as well as histories and cultures of the Spanish-speaking world. I completed a total of five years of Spanish in three years of high school, and I knew that I wanted to major in Hispanic Studies when I came to college.

How did you decide to work in admission at CSB/SJU?

CSB/SJU empowered me to live and work in a faraway land: the US/Mexico border became my home for nearly a decade following my college graduation. After those years, it was time to come home to Minnesota – and work for the school that has given me so many opportunities. Admission work allows me to develop relationships with students and families through one of the most important decisions that they will make in their young adult lives, and to work for greater access and diversity in higher education for all students.

How has your CSB/SJU education, specifically Hispanic Studies, aided you in your work?

I am now one of two members of the admission staff who are fluent in Spanish. I work with students in Minnesota as well as in Texas – primarily Dallas and Houston – in schools predominantly comprising Hispanic/Latinx students. While students speak English or are bilingual, many parents speak Spanish, and the ability to communicate with them throughout the entire college admission process is invaluable, especially when they have little or no experience with higher education. Parents want to know they can trust us – the admission staff and the entire institution – with the education and future of their children. The Latino/Latin American Studies concentration paired with Hispanic Studies helped prepare me to work with Hispanic families and communities, understanding important elements of culture for more effective communication and relationship building.

What did you do right after graduating from CSB/SJU.

Immediately following graduation, I completed a Fulbright Fellowship in domestic violence prevention in Ciudad Juarez, Mexico. I then earned a Master of Social Work degree at the University of Texas at El Paso and worked with children and families in school and community settings. There is an element of social work in admission, as I guide students in discerning the best fit for them

How would you explain CSB/SJU to prospective students and families?

At CSB/SJU, students attend two of the top Catholic Liberal Arts schools in the nation. The experience of two colleges together is unmatched, offering the exceptional personalized education one expects at a small private liberal arts college -- yet, with 3,800 Bennies and Johnnies, we provide a breadth of academic, professional, social, and spiritual opportunities found at larger universities. Forming a strong community of learners and friends, students develop a strong sense of social responsibility and strong intellectual and practical skills that span the major and minor fields of study. Most students live on our campus – amid forest and lakes - all four years, and a majority of students come to call another place in the world “home” by studying abroad. Through classroom and laboratory learning, research and case study applications, clubs and organizations, internships and service learning, students are empowered to contribute as citizens and excel in their career as graduates.

Over your four years at CSB/SJU what was one specific event, assignment, person, etc, that made a big impact on your life, and what was that impact?

When I returned from a semester of studying abroad in Chile, I decided to embark on a senior thesis project. It was time to submit my proposal, and I wanted to work on a theme having to do with gender and Latin America. I distinctly remember the moment, sitting in Clemens Library late at night, that I first learned about the documented disappearances and femicide (murders of women) in Ciudad Juárez, Mexico during the 1990s and 2000s. I was shocked: how could five hundred women – my age! – be murdered, without me ever having heard about it?! I dove into research, seeking to understand why women were being targeted and why men were perpetrating such violence. A turning point came when I happened upon a website for a Juárez community non-profit organization dedicated to the intervention and prevention of gender-based violence. Here was a group of primarily women dedicating themselves to changing the story of their city for current and future generations. I wanted to know that work, and I was encouraged to apply for a Fulbright research fellowship. One October day I wrote to the Executive Director of Casa Amiga, asking if a field researcher/volunteer about violence prevention would be of service to the center. She wrote back within hours, inviting me to come! And the rest is history…I was awarded the Fulbright, working with the most incredible team of men and women over the course of nine months, the seeds for my graduate degree in social work were planted, and the Juarez, Mexico / El Paso, Texas borderland became forever a home.