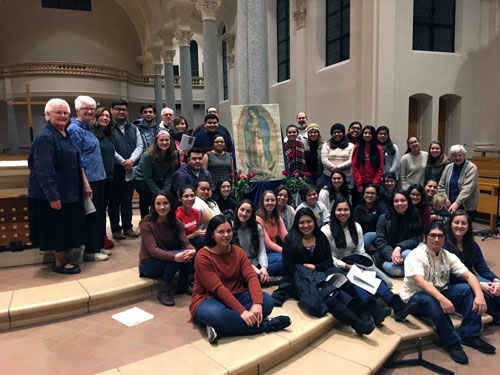 On December 12, a special mass was held in Spanish at Sacred Heart Chapel at Saint Benedict's Monastery to celebrate the apparition of Our Lady of Guadalupe. In 1531, the Virgen de Guadalupe appeared in Tepeyac (now a suburb of Mexico City) to Juan Diego, an indigenous Nahuatl speaker. Our Lady appeared to Juan Diego four times, performing several miracles, and instructed him to build a shrine in her honor, which has become one of the most important Catholic pilgrimage sites.

Our Lady of Guadalupe is a symbol of Mexican identity, and of church unity across the Americas.

This event was organized by Campus Ministries, and co-sponsored by the Spanish Club and Hispanic Studies Department.

November 2017     Culture in the Language Classroom

Does culture really belong in foreign language classes? If so, what should the cultural components consist of? On November 9, Dr. Blair Bateman, guest speaker from Brigham Young University, visited campus and addressed those questions with a focus on:

You can watch a video recording of the lecture here.

The lecture was funded by the Department of Hispanic Studies and the CSB/SJU Spanish Club.

CSB/SJU faculty members from Hispanic Studies, Education and Languages and Cultures attended the fall conference of the Minnesota Council on the Teaching of Languages and Cultures in Brooklyn Park, MN on Friday, October 27. Pictured left to right are Christina Hennessy and Tania Gómez (HS), Allison Spenader (Educ) and Ana Conboy (French/L&C). The four colleagues presented a panel called "Bilingualism and the Brain: The Benefits of Learning Another Language.” 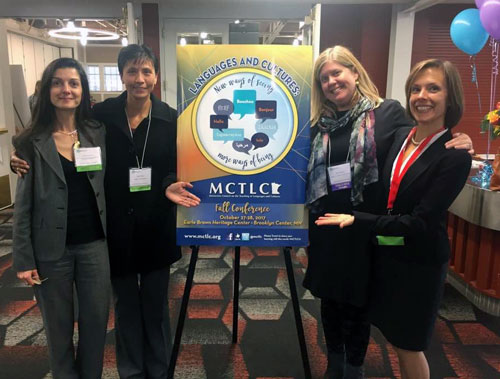 On October 19, members of Hispanic Studies, ELAC (Exploring Latin American Cultures), Spanish Club, and Campus Ministries held a ceremony and decorated an altar in preparation of Day of the Dead. Participants met outside Clemens Library for a procession into the library, where they had a brief ceremony and decorated the altar. The altar will stay up in Clemens until November 2, and people are invited to place photos or other mementos on the altar of loved ones who have passed away. 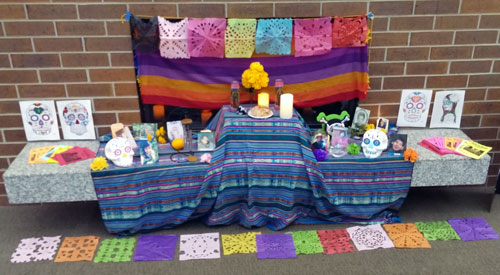 Day of the Dead altar

Several students from #CSB/SJU #guatemala 2017 study abroad group participated in a 10-hour weaving course @tramatextiles. They each made a beautiful woven scarf. This project was paid for by the Cultural Enrichment Fund in Honor of Professor Vera Theisen. A Special thank you to our teachers Oralia and Amparo for sharing their skill and patience with us as we learned. 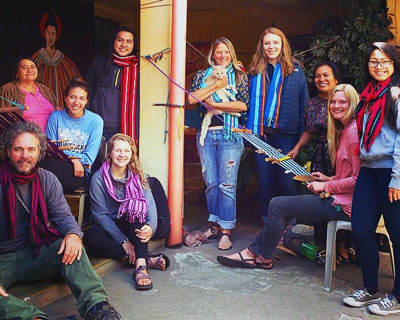 Trama Textiles is a women's weaving association that emerged from the 36-year armed conflict. In the early 1980's the conflict was escalated by the Guatemalan military (and the US through its arms sales), which resulted in the genocide of over 200,000 indigenous people. Many Maya women, mostly from the highlands of Guatemala, were left without a spouse, with children and with no income source to support their families. It was difficult to find work that did not take the women away from the home and the daily tasks of growing their food. Weaving allowed for women to stay in their communities and work. Today there are 400 women in the association who make woven textiles, which are then finished into beautiful products. When the women deliver their finished products to Trama Textiles they are paid directly and in the very moment. The members of the cooperative also describe how coming together to weave began to help them heal emotionally and physically. The trauma from the violence transformed as they came together to talk and create. The organization is run by two Maya women who continue to provide support to each community throughout the highlands in the form of capacity building and quality control. These two women also teach the weaving classes to hundreds of people each year. They are amazing. The fees for weaving classes go directly to running the organization because every penny from the products goes to the women weavers. You too can come to Guatemala and take a weaving class at http://tramatextiles.org just like the CSB|SJU students did during their semester study abroad. 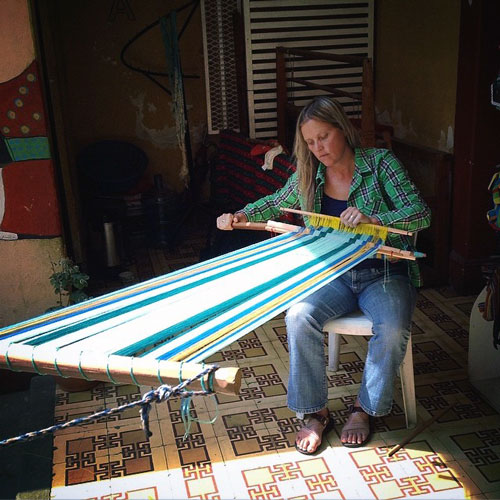 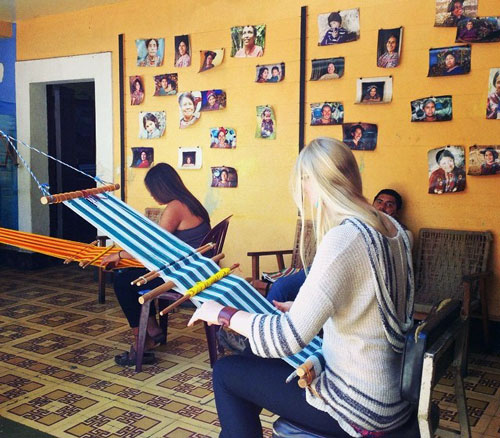 “I wanted to weave because I wanted to understand what life was like for the indigenous in Guatemala—the woven textiles are an integral part of the culture. The back-strap style and method of weaving was particularly tense at first, but it grew to be one of my go-to’s to relax and have a fun time. When I first started to undergo the process, my muscles were screaming because they were not used to the position; however, as time went on, I felt more comfortable with the tools and materials at my disposal. In addition to that, I had the resources of the two experienced teachers at Trama Textiles as well as my peers who all were in the same position as me. Overall, I felt that by participating in the weaving class, I was able to achieve more and reach greater heights in the comprehension of language, history, and culture of Guatemala.” --John Nguyen '19

Spring 2016   Congratulations to Roy Ketchum for receiving tenure at CSB/SJU!

Congratulations to Tania Gómez, Christina Mougoyanni Hennessy, and Patricia Bolaños-Fabres on the publication of their new book titled Gender in Hispanic Literature and Visual Arts. The collaboration by the three professors of Hispanic Studies resulted in an "eclectic collection of essays that takes the ongoing conversations about gender in the Hispanic world into the twenty-first century." The book "examines cultural discourses on women in the Hispanic World and offers insightful and nuanced analyses of contemporary literary works, films, performances, and paintings." Gender in Hispanic Literature and Visual Arts is published by Lexington Books and can be purchased through the CSB/SJU Bookstore and on Amazon.

The McKeown Center at SJU was the site of the second ever CSB/SJU poesía y burritos on November 1, 2015.

CSB/SJU students, faculty, and friends came together for Baja California inspired fusion burritos prepared by Danielle Taylor with local ingredients from Dancing Bears Farm, the Common Ground Gardens, Baker's Acres and the Minnesota Street Market. The squash was a big hit, "I never thought of squash on a burrito," said one of the participants, "but that was awesome." It is all about the sauces.

Our special invited guest, Emilio del Valle Escalante, who is on campus as a part of the Fall Latino Latin American Lecture Series led us in a collaborative poetry reading. We took turns reading in Spanish and English from a collection of Maya poetry. We also had the wonderful opportunity to hear Emilio read two poems by Pablo García in K'iche' Maya.

During the first half we heard poems by Calixta Gabriel, Francisco Morales Santos, Luis de Lión, Gaspar Pedro González, and Victor Montejo. We heard connection to the earth, to corn, to the Nawal. We learned about Hunapú and Ixbalanqué, the twin heroes, who came long before Superman and all his brothers. We heard a dialogue where the ancestors encouraged their descendants to reclaim their own ancient wisdom. Memory, identity, place and justice are just a few of the themes running through all of the poetry and our conversation.

After a coffee break, Emilio read two poems in K'iche' Maya from Pablo García's collection, Song from the Underworld.  We heard Maya Cu Choc's poetic voice refusing to be seen as a mythical character or a face on a postcard. Daniel Caño, in the last poem we heard, asks why or when a child stops talking to the plants and the butterflies. Indeed, what makes us think that our connection to the natural world is ridiculous and where does our curiosity go?

Students who studied in Guatemala during 2015 described connections between this poetry and their experience abroad. Students getting ready to leave for Guatemala in January, 2016 called the event enlightening and eye-opening. Thanks to everyone for participating.

Thanks to the Latino Latin American Studies Program and the Department of Hispanic Studies for bringing our special guest to campus.

Most of all thanks to Emilio del Valle Escalante for bringing the poetry. 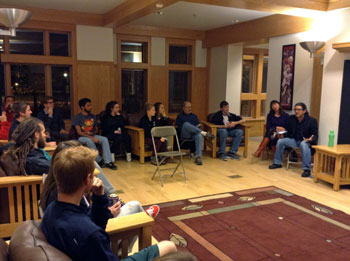 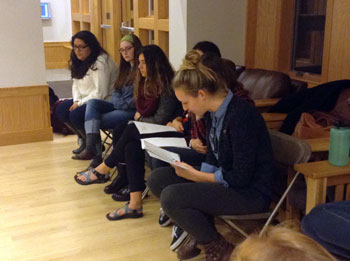 During the week of March 9th, students in Professor Nelsy Echávez-Solano's Latin American Literature and Culture through Theater course had the once-in-a-lifetime opportunity to work with Colombian award winning playwright, director, and poet Carlos Satizábal.  Professor Echávez-Solano and Professor Satizábal ran an intensive, four day workshop for the class, which involved creating a bilingual play in Spanish and English centered on issues of gender.  This theatrical piece was written by the students themselves and was directed by Professor Satizábal.  In addition to workshopping with Professor Echávez-Solano's class, Professor Satizábal also spent a day with Professor Roy Ketchum and the students in his Conflict Transformation and Latin America in a session dedicated to the power of poetry.

On March 12th of 2015, The Department of Hispanic Studies hosted a very powerful event which involved a debut performance of the play created by the CSB/SJU students in Professor Echávez-Solano's course; an international visit and discussion with the Colombian Mothers of Soacha; and a play involving the Mothers of Soacha and directed by Mr. Satizábal, entitled Antígonas: Tribunal de Mujeres.  All three pieces of this event were well attended by students, faculty, other members of the CSB/SJU community, and outside professionals within the field.  These events were organized by Professor Nelsy Echávez-Solano and Sarah Schaaf, and a special thank you to Professor Corey Shouse for his excellent job interpreting during the evening.

Two CSB students, Jillian Andresen and Amber Warner (2015), who were involved in the event share their moving experience with us. Read more... 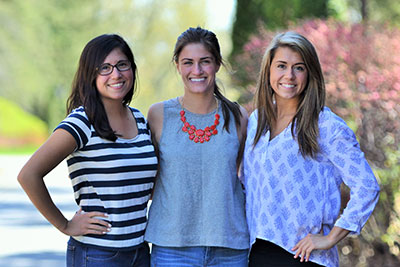 The Sister Renée Domeier Scholarship for Spanish is available on an annual basis for Hispanic Studies majors enrolled at the College of Saint Benedict. Applications are accepted in the spring and are open to CSB majors who will be juniors or seniors the following fall. Recipients are chosen on the basis of scholarship, strength of academic purpose, and financial need. More information on the scholarship can be found here.

Congratulations to the following Hispanic Studies majors, class of 2015, who were inducted into Phi Beta Kappa on April 22, 2015.

Students are inducted into the honor society on the basis of
their achievements in the liberal arts and sciences.