an evening with Winona LaDuke

Winona LaDuke is a Native American activist, economist, and author. An Anishinaabekwe (Ojibwe) enrolled member of the Mississippi Band Anishinaabeg, she has devoted her life to advocating for Indigenous control of their homelands, natural resources, and cultural practices. 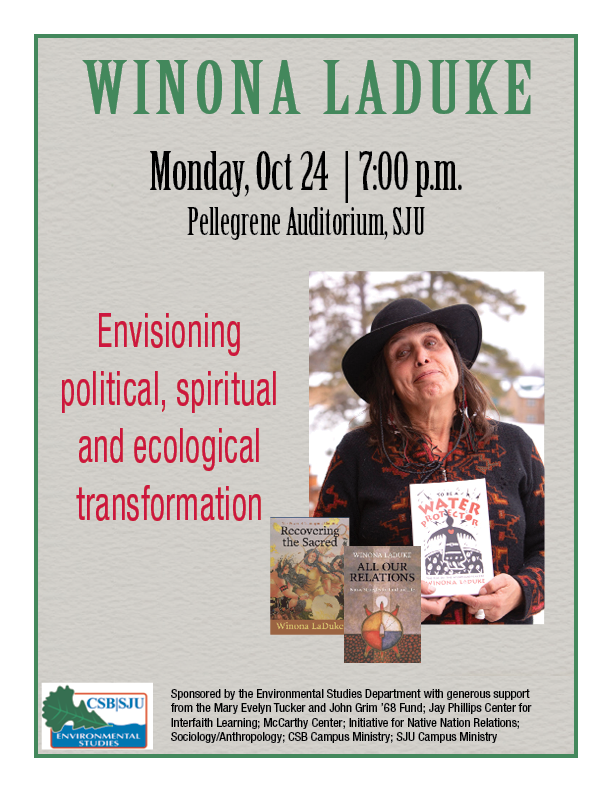 Winona LaDuke is one of the world’s most tireless and charismatic leaders on issues related to climate change, Indigenous rights, human rights, green and rural economies, grass-roots organizing, local foods, alternative sources of energy and the priceless value of clean water over a career spanning nearly 40 years of activism.

Winona is an Anishinaabekwe (Ojibwe) enrolled member of the Mississippi band of Ashinaabeg who lives and works on the White Earth Indian Reservation and is the mother of three children. Winona founded the White Earth Land Recovery Project in 1989 and served as its executive director for 25 years. She is currently the executive director of Honor the Earth, where she works on a national level to advocate, raise public support, and create funding for frontline Native environmental groups. In 1994, Winona was nominated by Time Magazine as one of America’s fifty most promising leaders under forty years of age. She was awarded The Thomas Merton Award in 1996, The Biha Community Service Award in 1997, The Ann Bancroft Award for Women’s Leadership Fellowship, and The Reebok Human Rights Award (which she used to begin the White Earth Land Recovery Project).

A graduate of Harvard and Antioch Universities, Winona has written extensively on Native American and Environmental issues. She is a former board member of Greenpeace USA and serves as co-chair of the Indigenous Women’s Network, a North American and Pacific Indigenous women’s organization. In 1998, Ms. Magazine named her woman of the year for her work with Honor the Earth.