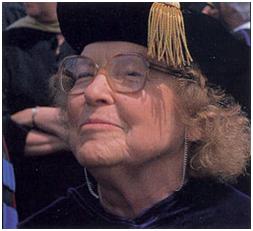 I know that other articles in this edition of The English Web will focus on the life and achievements of S. Kristin Malloy. S. Kristin was a dear friend and a longtime member of the English Department. She died on September 20.   I was honored to be one of the pall bearers at her funeral. During the service, I found my mind wondering to memories of Kristin as she was when I knew her best. Though it might seem a bit unusual to some, Kristin and I were classmates and doctoral candidates together at the University of Minnesota in the early 1980's. Most of our fellow graduate students were in their late twenties or early thirties-the common age for PhD students. Kristin was nearly sixty years old when she started her program. Here
are a few memories of Kristin Malloy-the graduate student.

Kristin and I knew each other before we both enrolled in graduate school, but we did not know each other very well. We got to be friends when Kristin began asking me for rides to campus. These rides often began with a phone call-a memory of such a phone call popped into my head during the funeral service. Here is how it went:

Mike: "Kristin?" Kristin: "Yes. Ah Michael, would you be going to Minneapolis today?"

Kristin: "Good! And would you be able to pick me up and give me a ride to campus?"

I spent the afternoon studying in the CSB library-waiting for 6:00 to roll around.

One night, as we were driving to the University of Minnesota campus, I asked Kristin why she was starting a PhD program at an age when most people are contemplating retirement. Kristin always had a sparkle in her eye. I could see her eyes flash in the reflected light of the dashboard. She paused briefly and said-slowly and carefully: "Michael, no man is every going to tell me I can't teach again." In that one moment, I could feel a little bit of the resentment she must have felt at her banishment for teaching Catcher in the Rye. I had heard Kristin talk about this before, and I won't recount all the details here. But I could feel her passion for teaching and for intellectual life in that brief moment.

Kristin lived in a dorm during her first two years in her program. I would drop her at the door, park the car and carry her luggage to her. Invariably, there would be several young students waiting for Kristin to arrive. Kristin had befriended these young women who lived on her floor. They eagerly awaited her arrival so they could "talk." I never got to be a part of these "talks," but I frequently saw the group of students gather around Kristin in the dorm lounge. She could reach across generations. The students met her as a true friend. I felt the same way about her.

Kristin and I took Chet Anderson's class, "Seeing Through Poetry," together in our first semester. Chet's adamant Freudianism, and his attachment to critical theory was a shock to me at first, but I adjusted and loved the class. Kristin adjusted too. I remember one night when we had class at Chet's apartment; we sat high above Loring Park, looking out at the Minneapolis skyline. We were scheduled to discuss our papers. Chet, who was a generous and hospitable man with a great laugh, had set out food and drink for us-his students. We sipped Irish whiskey and talked the night away; ideas of Freud, Lacan, Foucault, Derrida drifted through the conversation. A small, red-haired, Irish-American nun was right in the middle of this conversation-enjoying every minute.

She had a way about her. She was at home in this gathering of sharp, young scholars. She was at home in a dorm lounge having heart to heart talks with even younger students. She was at home, sharing her stories in a dark car speeding down the freeway toward her improbable PhD-being driven there by a friend who was also on his way to an improbable PhD. Most of all, Kristin was at home in the classroom. She was not going to be kept from teaching. Many of us who were in some way students of hers will always be grateful for her determination, her courage, her intellectual adventurousness and her sparkling wit. S. Kristin Malloy was one of a kind. I'm glad I had the chance to know her.