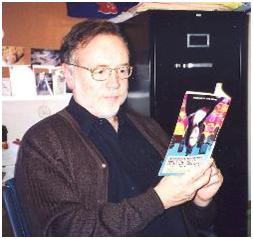 This academic year-2008-2009-is the final year of my six year term as English Department Chair. It has been a strange and eventful year. I've been thinking about that lately. My final "Notes from the Desk of the Chair" column will be a snapshot of that year.

If you have navigated your way to The English Web, you must have noticed the our homepage now contains the posting of twenty-two minutes of a performance that Larry Schug and I did last September 18 in downtown St. Joseph. Check out the video. It will take you back to an innocent time and trigger some memories of the streets of old St. Joe. The evening was balmy and breezy. You can hear the roar of cars and motorcycles in the background. Larry and I-as well as those who came to see us-were happy to be outside on such a night. The Millstream Arts Festival, a fixture in St. Joseph for many years, sponsored this outdoor concert/ poetry reading as part of its summer music series. Larry read from his recent poetry and I performed new songs from the album that I will record this summer. It was a fun night. Larry started by reading a few poems; I did a couple of songs and then we alternated for about 90 minutes. The warm evening turned into a warm September night. Summer was trying to hang on, and people were reluctant to leave. We wrapped up the performance in the dark and packed up the equipment with the help of many friends.

It was only much later that I came to think of this night as an innocent time. I had enjoyed the evening. The audience was wonderful and receptive; I think everyone had fun. I hope the video captures the feeling of that night. Looking back, it seems like we were on the edge of some kind of cultural and emotional cliff. For instance, it was only September. The most historic presidential election of my lifetime had not happened yet but the campaign was unfolding. And while the economy was showing obvious signs of collapse, most of us did not know how bad it would soon be. Locally, none of us knew Brother Dietrich was seriously ill with rapidly spreading, terminal cancer, and we thought the school year would be "business as usual." Those of us in the English Department knew that our colleague and friend, S. Nancy Hynes, was also battling cancer. Nancy had beaten cancer before. In September, she seemed to be holding her own and doing well living what she called her "bonus days." I remember thinking that she would have been an enthusiastic and rowdy member of the audience that night-if she had been able to be there. I could imagine hearing her characteristic shout of "Huzzah."

This issue of The English Web is dedicated to remembering Nancy. I had known Nancy for many years-since her days of high school teaching when she was known as Sister Linus (C minus Linus to some). I knew she could be enthusiastic, loud, brash, creative, challenging and sometimes difficult. But my memory of her is a quiet memory.

There was a time in the ancient past when the English Department had only one computer for all of us to use. I was using it at night to write my dissertation. I would come to the office around 6 or 7 P. M. and work until midnight-sometimes later. These were lonely, intense nights; often, I was lost in the trance of thinking and writing. Some nights, I could generate several pages of good writing. Other nights, I made no progress at all. One cold, dark December night, I was concentrating at the computer when I felt a hand on my shoulder. I turned to see Nancy standing behind me. She said, "Hang in there. You can do it. I know you can." Nancy's quiet encouragement nourished me then, and I remember it vividly now. This was not the brash, or difficult Nancy. This was the supportive colleague and the steadfast friend that all of us knew.

S. Nancy Hynes died on December 15. We miss her.