A Tribute to Nancy Hynes

Sister Nancy Hynes was a woman of many hats-most of them flamboyant-and many selves. There was Nancy the performer, who liked nothing better than delighting an audience with a recitation of Lucille Clifton's "Homage to My Hips," complete with lots of body English:

they need space to move around in

they don't fit into little

This self spilled over into Nancy the teacher. She was vigorous, compassionate, exacting, but more than willing to astound a class that had just read "The Yellow Wallpaper" by crawling silently around the room on all fours with her shoulder rubbing against the wall, as the story's desperate protagonist does.

A less flamboyant self was Nancy the writer. I knew that quieter side because I was in a small writing group with her for more than fifteen years. Nancy, a friend from Carleton, and I met regularly to read each other's scholarly work and offer critique and encouragement. Shortly before she died Nancy had almost finished a literary biography of J.F. Powers, "the sequestered genius of Collegeville," as someone called him, who was a visiting writer at SJU for a number of years. Nancy gravitated to J. F. because he was a satirist whose opinions, like hers, often went against the grain of culture and church, though in different directions. She wanted to bring his genius to the attention of twenty-first-century readers, who might be put off by his tales of priests and rectories. She was convinced that he has something important to say to all of us about grace and dreck, J. F.'s word for the materialism and shallowness of mid-twentieth-century America. 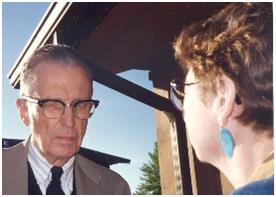 But Nancy didn't gravitate naturally to writing, in spite of the fact that she taught it capably for years at CSB/SJU, setting high standards for hundreds of students, including me. She was my first writing teacher at CSB, and true to her name of " C-minus Linus" (Linus was the name she took when she came to the Monastery), that's the grade she gave me on my first ever college essay. I was an aspiring writer who thought that anything I slapped down on the page would impress my teachers with its brilliance. Nancy was not impressed. You need an argument, she said, and support and evidence and concrete details. Oh. She taught those same lessons to generations of students, especially in First-year Symposium.

Nancy thought of all writing as conversation and liked writing spirited homilies, speeches, and class presentations; she even liked doing the research for her book because that meant she could interview J.F.'s children and many friends. But actually writing the book and, worse yet, revising it was much too silent, much too solitary for this woman who loved being with people. Still, she worked at it doggedly for several years, telling the story of J.F.'s life and analyzing his writing in her distinctive voice-down-to-earth and often as satirical as J.F. himself.

Nancy died before she was able to complete her book and find a publisher for it. We've bequeathed her copious research notes and her drafts to the CSB Archives, in the hope that one day another scholar will honor both J.F. and Nancy by completing what she has begun.