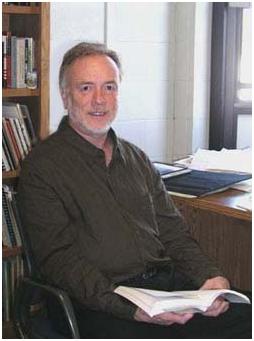 About a month ago, as I was fumbling with keys outside of my office at SJU, Luke Mancuso greeted me and informed me that he had something I "had to see."  He was holding an aging copy of the CSB/SJU Directory, 1979-1980.  As we began to page through the faculty photographs (those were the days when we still published photographs), our laughter could be heard echoing through the halls of the Quad.  For those of you who are too young to remember and for those of you who can't remember that long ago, I must note that almost all the men sported either full beards, mustaches or both.  Women and men wore long hair.  Mara Faulkner appears relaxed and very tan in her picture.  She explains that she had just returned from teaching in the Bahamas.  Ozzie Mayers has the fullest beard of all the beards and a great head of curly hair.  I was busy chuckling at Ozzie's picture until Luke turned the page.  There, also sporting a beard and a mop of curly hair appeared the picture of a guy I hardly recognized.  Alas, it was me.  I quickly moved to turn the page, noting in passing that there was no trace of grey in my full beard.  Our gaze landed a few pages later where we found another young and bearded face smiling back at us.  This was a picture of Charles Thornbury.

On December 15, the English Department will celebrate Charles' retirement with a reception and dinner.  Charles came to us in 1977, so the picture in the 1979 directory was that of a relatively new faculty member.  In his years in the department, Charles has served as department chair and also as the Blecker Chair in Humanities (1995-1998).  He has been active in the development of gender studies on our campus.  He has been known to many of us as a fine writer and biographer of the poet, John Berryman.  Recently, I asked Charles about his plans for retirement.  He plans to move back to Chattanooga,, Tennessee, where he owns a house.  He says he is pleased with the house because he has been able to convert two rooms into libraries.  One of these will be his "Berryman Library," which will house the material he has gathered in the years he has worked on Berryman.  He plans to continue his writing and looks forward to the time he will have to work on his many projects.  Those of you who know Charles and his deep love of literature will understand that two libraries do not constitute a form of hyperbole.  Rather, it seems appropriate that Charles will have at least two rooms full of books in his home.

The retirement of Charles Thornbury is one more change in a series of changes that the English Department has undergone in the last few years.  As readers of this newsletter will know, we have said goodbye to Fr. J. P. Earls and S. Eva Hooker last spring.  This semester, we have two new members in their first years of teaching with us-Dr. Hadara Bar-Nadav and Dr. Matt Harkins.  We will send a committee to Philadelphia this month to interview candidates for another tenure-track position.  This position will be in Transatlantic Studies-an area that includes early American literature as well as connections to British and other literatures of that period.  In the next issue of The English Web, you will learn of another new member of the department.  We have not met our new department member yet, but we are hopeful that the new person will bring the same love of literary studies and learning that our retiring members have embodied.  The beards may be gone-well, not quite gone-I still have a grey one and Matt Harkins does wear a beard-still, the department goes on.  We are in an exciting period of rebirth and growth.  I will keep you posted on the exciting and imminent changes.