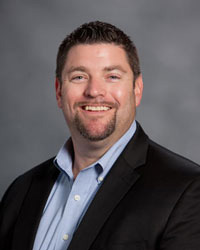 Currently I am one of five General Managers in the Sourcing Division of CH Robinson. I oversee the Southeast Region of the U.S. which includes five sales offices in Georgia, Florida, and Puerto Rico. For the past few years my teams have been charged with growing export sales of fruits and vegetables into South America, Central America and the Caribbean. These are emerging markets for CH Robinson, and as such we've been pioneers in the company, creating supply chains from scratch, and finding ways to re-create our domestic services in foreign lands.

When I selected English as a major I also had a Pre-Med focus, and rather than select a science major I chose to focus in a field that would allow an outlet for creativity. The experiences I had in earning my English degree gave me both a greater enjoyment of literature, as well as the ability to convey my thoughts in a more cohesive and creative manner.

In my career, building business while simultaneously building your own brand is made and measured through the organization and delivery of thought. My ability to lead my teams, while securing integrity and intent, is fallible without the means to illustrate the vision or publish the strategy. Whatever professional success I've enjoyed has not been realized without fond recollections of CSB/SJU, and its beloved English department.