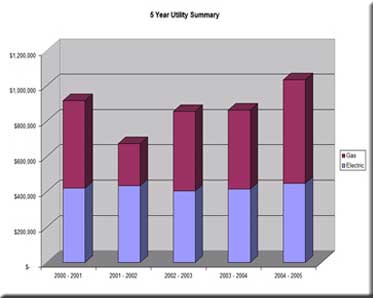 The 5 Year Utility Summary reflects the cost of natural gas and electricity from each academic year. The consumption of these resources fluctuates from year to year depending on the weather. Some winters can be extremely cold, causing more gas to be needed to heat the buildings on campus.The amount of heat used to keep the buildings warm and to heat hot water when cooking, influences the amount of gas consumed. During academic years when the cost of gas is low reflects relatively warm temperatures during the winter when not as much gas was needed to heat the buildings.

Another factor that can contribute to an increase in the amount of natural gas and electricity utilized is the amount of square footage. For example, when the new dining facility is completed, the amount of gas and electricity consumed will be maintained as best as possible to minimize energy usages. It will be maintained as low as posible with the college's state of the art energy systems. This helps to reduce energy costs by using censors to shut off lights when not being used, to turn down heating/ cooling when needed, and to shut off the HVAC equipment when not needed. The new dining center will effect the how much the college is paying for its energy resources because they will need to use more, but through the college's energy management systems these costs can be minimized.