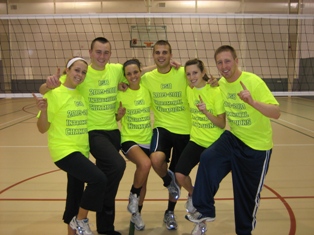 The format for these leagues has been designed to accommodate all participants' recreational needs. Teams will play one night per week. Teams may sign up for more than one night. However, we do not allow one person to play on different teams in the same sport league on the same night due to scheduling conflicts and to prevent "stacking" teams.

There must be a minimum of 8 teams registered for a particular league, otherwise, the two divisions on the same night will be consolidated into one league. Teams must specify on their roster which division they would like to play in. Leagues are as follows:

A League - for teams with high school or club team competitive volleyball experience.  This league is for teams who want to compete seriously at a high level of play.

C League - for teams with little volleyball experience.  This league is for teams who want to play the game for fun and have limited or no prior experience playing the game of volleyball.

**Please note the rule change for the 2008 fall league below**