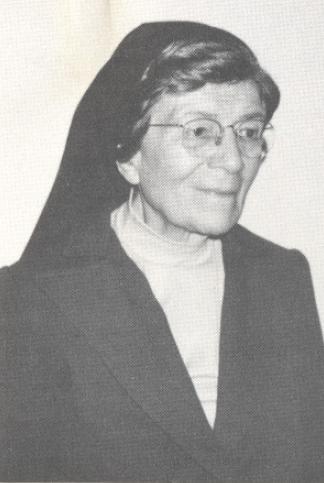 Sister Urban (Teresa) Gertken, 94, died quickly and peacefully at St. Benedict's Convent at 10:30 p.m. on Friday, April 10, 1987, three months before her 75th anniversary of profession as a Benedictine Sister. Although heart disease was diagnosed many years ago, Sister has always been active in community life. Friday was a normal day and she went to bed in the evening as usual. A little later she felt severe chest pain, was able to go for help, but died in a very short time. Sisters Assumpta, Cecile and other Sisters were with her, singing the "Exultet."

Teresa was born in Richmond, MN, on January5, 1893,the ninth of thirteen children in the family of Lucas and Margaret (Schneider) Gertken. She attended the Richmond District School, where the teachers were Benedictine Sisters, and came to St. Benedict's in 1908. She graduated from St. Benedict's Academy in 1910, was received into the novitiate in 1911 and made vows on July 11, 1912.

Sister Urban's first organ teacher was her father; at St. Benedict's she was Sister Ulric Beste's pupil. She earned a B.A.in Music from the College of St. Benedict in 1924 and a Master's in Music from Chicago Musical College in 1938.She did graduate work in choral and liturgical music under outstanding Benedictine authorities. Sister Urban lived all of her life as a religious at St.Benedict's,usinghermusica1 gifts for teaching piano, organ, Gregorian chant and rubrics, and as organist and choir director. She began teaching organ and piano in St. Benedict's Academy in 1912, was a member of the first College of St. Benedict faculty and head of the Music Department from early 1930's to 1948. She served as organist for the chapel from 1910 to 1966 and in addition directed the Schola from 1921 to 1961. Under her direction the Scho1arecordedfor the Gregorian Institute of America and for radio programs. Sister Urban taught the Sisters the musical elements of the Divine Office beginning in 1926 when it was adopted.

Sister is survived by three of her six sisters who entered our community, Sisters Gemma, Assumpta and Cecile. Four sisters and five brothers, four of who were Benedictine monks, preceded her in death. A wake service was held at St. Benedict's Convent at 7:00 p.m. on Monday, April 13, and a wake from then until the Mass of Resurrection at 11:00 a.m. the following day.

Throughout her life Sister Urban praised God and helped others praise God with prayerful music. May he receive her into the fullness of his life and joy.