The short answer: I play with underwater robots in the Gulf of Mexico.

The long answer: I work for Oceaneering International, Inc., a global provider of services and products used primarily in the offshore oil and gas industry.  I operate, maintain and repair the ROV, which is an unmanned submersible operated from the surface via umbilical. The ROV is capable of attaining depths of 10,000 feet of seawater or more. It's used for underwater construction, oil well completions, and decommissioning of rigs damaged in hurricanes.

How did you end up doing  what you are doing?

I became SCUBA certified in 2001 and moved to Thailand to train and work as a Divemaster in 2002.  Eventually

I returned to normal work and life in Minnesota but continued part time in recreational diving because I loved being underwater.

After my 30th birthday, I relocated to Santa Barbara, California, to complete a certificate program in Marine Diving Technology.

I moved to Louisiana in March 2008 and hired on with a small ROV company. I found that women in professional roles offshore were something of an anomaly. Women are less than 5% of the workforce off shore, so not all vessels and rigs are able to accommodate female crew members due to lack of gender-specific facilities and sleeping quarters. Shortly thereafter I signed on with Oceaneering, which is much larger.

Which aspects of your CSB   experiences helped you in your later achievements?

I completed my first recreational dive during my semester abroad in France.  My guide spoke only a dialect of French I couldn't begin to understand, and I was actually kind of scared of water, but I made the dive, and loved it.

Generally speaking, though, my time at CSB was eye-opening in the sense that there was always an opportunity to try something new. At CSB, I first understood the extent to which I wanted to dabble, which is sort of my raison d'être, and which is a great characteristic of a liberal arts institution.

What is exciting or rewarding to you in your work?

I love the challenge of learning about something so foreign to me.  I love to tinker and fix things, to consult diagrams and schematics, to troubleshoot when something is malfunctioning. I love piloting the ROV underwater. I love the simplicity and focus of working on a rig; I love how much I appreciate daily life when I'm at home.
More than anything, I love that this is my job.  It's hard to explain, but there's something really gratifying about doing something I never imagined I'd be capable of doing.

Does the public typically misunderstand your work?

The public almost always misunderstands my work!  People  assume I dive or that the ROV is a submarine or that I work on crab boats for a living, à la Deadliest Catch.

My workdays involve maintaining or repairing the ROV, piloting the ROV underwater with monitors, video and still cameras, lots of computers, joysticks, knobs and buttons, or performing auxiliary jobs like operating a manipulator (a robotic function roughly equivalent to a human hand) on the ROV.

All of this takes place on a large boat or oil rig (which I liken to a floating metal island). We work twelve-hour shifts, seven days a week, and usually stay offshore for three to four weeks at a time. It's industrial, so steel-toe boots, safety glasses and a hard hat are required.  Every day is different, whether it's unexpected repairs to the ROV, new requests from the client, or hazardous weather.

What advice do you have for current students who might be interested in your work - or just general advice to all students?

It's best to talk to people in the industry about the work, but also about the lifestyle, which is definitely the biggest challenge for most.

My best advice is to keep a positive attitude outwardly (even when you're not always feeling it), be resilient, and learn to connect with everyone you meet.

"I Play with Robots" 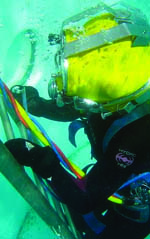 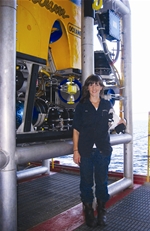