"Our two biggest mass casualty events were big mortar rounds 14 days apart that both landed in our camp at lunchtime, where the detainees were all gathered around food. Strategicallly, that's why they hit at that time -- to inflict the most damage.

"Then, I see pictures that I can't remember at all.  But I know the pictures are from my camera.

"And, I wonder again if this really happened at all."

Riley was stationed in Abu Ghraib prison in 2004-05. Like many people of his generation, he was in the habit of taking photographs of everything, all the time, and ended up with thousands of digital images of his time in Iraq. As he is not a professional photographer, his photographs were not professional, not glossy, not staged. Sometimes they have no focus and most of them seem to be fragments or random pieces of a larger, hidden story. All of these qualities give them an intense immediacy.  Probably nobody would look at them and see them as art.

After Monica earned her graduate degree, she earned fellowships, received grants, lectured and taught, and exhibited her work in a wide variety of settings.  The exploration of how to bring mass culture and artistic work into dialogue became a theme she explored often. Her goal was to close the gap, to take back the territory between mass audience and challenging artistic work. 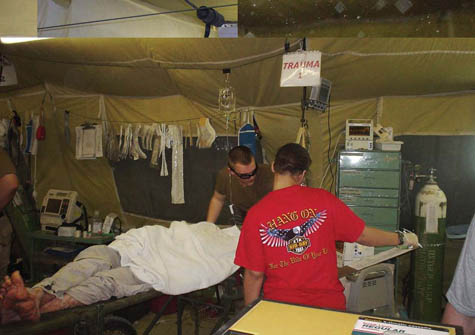 Monica and Riley have, together, accomplished something astounding. Monica transformed Riley's huge and random storehouse of images, as well as his reflections about his fleeting traumatic memories, into an art form that is also a mobilization of information. It is called Riley and His Story and, although it is alarming and awful to experience, it is also stunning in its integrity and inventiveness.

The first sentence of the book - actually it's on the cover - is "This is not a book." If one wants to know why one is then purchasing it from the book section of Barnes and Noble, the answer is that it is an invitation to families and friends to explore the nature of memory, the nature of how war is experienced by individuals, mass culture's habit of using the camera as prosthesis, and how a visual narrative can lead to healing. Riley and His Story contains images of modes of military transportation: humvees, planes, helicopters, tanks. It is, in itself, a vehicle carrying courageous human souls into and out of someplace terrible and dangerous.

Another reason it is not a book is that it is one part of a much larger project.  Monica has developed workshops and software for Iraq and Afghanistan war veterans to use to archive their own experiences.  Workshop participants' work will later be collated in exhibits and websites.

In the meantime, this intersection of book and not-book, between art and not-art, between mass culture and serious art, and between lived experience and elusive memory has been published by Onestar Press and is available at Barnes and Noble.

I am going to end by dropping my third-person voice to tell you two things:
Riley and His Story is respectful of Riley and the thousands of other Americans who have experienced the trauma of war.  It doesn't take a political stance on the war itself because it doesn't simplify their complicated experience by assigning itself to one political agenda.

There is a statement at the end of the book that says, "These aren't the photos we're going to find in grandma's photo album."  Well no... it isn't something that should be given or presented to anyone who is not prepared to look directly at the details of combat.  However, I know many Bennies who could handle it...and some of them are grandmothers.

"The people who delivered our food got killed -- three weeks in a row . . . Then . . . our laundry ladies disappeared. And the story was they were killed on their way to work. Somebody executed them. Yeah. A lot of them died."

Riley and his Story is available online in excerpts as a PDF. NOTE: the images in the book are very raw and very real.