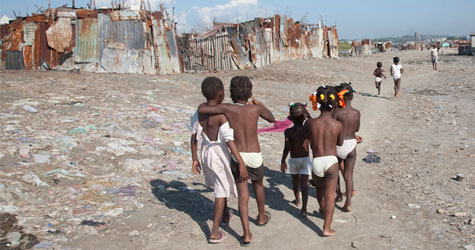 Describe your work:
Print for Change provides the best in commercial printing at competitive rates with excellent service and then donates half of its profits to provide water, food, shelter and education to people living in extreme poverty in Haiti.

How did you end up doing  what you are doing?
After attending Saint Ben's, I taught elementary school. When my daughter, Macy, was born my husband, Jeremy, and I moved to Manhattan to pursue his career in commercial printing sales. Jeremy worked from our apartment, and I began to learn the inner workings of selling commercial printing to clients ranging from small design firms to Fortune 500 companies.

Jeremy and I were enjoying raising our two children (son Cole was born in 2008) and taking advantage of the opportunities New York City has to offer. However, we both felt that something was missing. Although we had tried to be socially conscious and involved in charities, we were lacking significance in our careers. In November 2009 Jeremy traveled to Port-au-Prince, Haiti with his aunt and uncle, founders of HealingHaiti.org.

Jeremy's heart was broken wide open by the extreme poverty and need. He came home struggling to figure out how he could help in a sustainable way. Jeremy's uncle, Jeffrey, had started Print for Change's online division less than a year prior as a place people could order business cards and then profits could help with Healing Haiti's mission. Jeremy and I decided that if we could start the commercial printing side of Print For Change the volume of printing sales could really make a difference by providing sustainable revenue. 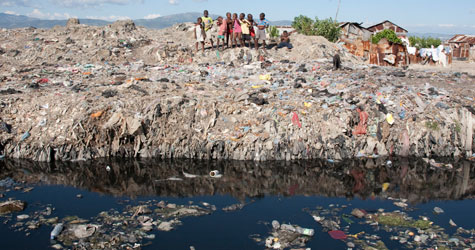 Which aspects of your CSB   experiences helped you in your later achievements?
Attending Saint Ben's helped me to become an effective and confident communicator. These skills are key in all aspects of business, especially when trying to explain our mission and business plan to potential clients. It is also so important when working with people living in extreme poverty to be a good listener in order to problem solve and attempt to make their lives better.

I also had many opportunities to become educated about poverty, inequity, and foreign policy. The core values of social responsibility and dedication to justice have helped open my heart to needs that exist. Also without my faith in God that was strengthened at Saint Ben's I would never have had the courage to let go of some of the comforts in my own life in order to help others.

What is rewarding in your work?
In January 2010, I took my first trip to Haiti. All six Print For Change employees, along with four clients, were on this trip. We delivered water to Cite Soleil, the poorest slum in the Western Hemisphere.

We were led to the "beach" which is an area on the shore of the ocean where everyone goes to the bathroom. It is also an area where they bury the dead. Standing in the midst of that with children gathered around me was overwhelming. It was awful.

We made four runs of water that day to different areas of the village, and each time women were begging us to help them feed their babies or take their children. Yet, the children's positive, loving, and faithful spirits humbled me. What an example they could be for all of us.

We also presented a school with a check that would cover expenses for a roof on a four-room school that educates over three hundred children.

We spent a day in a home for sick and dying children. There are no words to describe how I felt as I held babies who were suffering from malnutrition and illnesses such as tuberculosis or malaria. There were so many babies and not enough of us to comfort them.

I struggled leaving Haiti. Being with people with unbreakable faith was so inspiring and easy compared to going home and trying to continue to make a difference. I never dreamed that two days later things would get so much worse.

Does the public typically misunderstand your work?
People often cannot comprehend our business model of donating 50% of profits in such tough economic times. It is when we show them the results of what their print job has provided for the people of Haiti that they really get it.

Jeremy and Krista Ceary Carroll, both '00 graduates, in Cite Soleil, Haiti. Each week, their company, Print for Change, delivers 87,000 gallons of water to this village.