From half a world away

When Elise Johnson '06 was in sixth grade, while on a day-trip to St. Cloud, her family took an unplanned detour to the College of Saint Benedict, to visit one of her mother’s favorite professors. 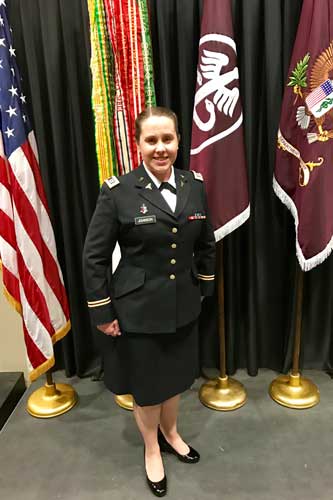 “From the moment I set foot on the campus as a 12-year-old, I just knew I wanted to attend Saint Ben’s,” she recalls. “Thankfully, I had worked hard to get good grades. I was able to get a scholarship package sufficient for my family to afford the remainder.”

Those scholarships helped Elise cover the cost of her Saint Ben’s education. Meanwhile, her brother, Aaron Johnson ’07, was an ROTC Cadet at Saint John’s. So when Elise graduated and began looking at medical schools, she understood the framework of the U.S. Army’s Health Professions Scholarship Program.

“It’s similar to ROTC in that the Army covers the costs associated with attending medical school and, in exchange, the recipient completes a few years of active duty service after medical training has concluded,” she explains.

She’s now serving those few years as a U.S. Army doctor. In September, she was deployed to Afghanistan, working in the Emergency Department of a small NATO hospital with health care professionals from eight different countries. Together, they care for everything from seasonal allergies and influenza to severe trauma.

“I’ve really enjoyed the opportunity to get to know and learn from health professionals from all over the world,” she smiles. “In our spare time we have fun playing bingo banko (a Danish form of BINGO) and I’ve even learned to play Texas hold ’em.”

“When it comes to charitable giving,” Elise says, “I was raised with the mindset that of those to whom much is given, much is expected.” No matter what her financial status has been, she’s always done her best to share her time, skills and whatever money she can spare.

That’s what got her started with CSB’s Young Alumnae President’s Circle (YAPC). Young alums make regular gifts in gradually escalating amounts as they progress in their new careers. But life gets busy and complicated and distracting. And Elise’s gift amount fell behind that rising curve. She was still making regular donations, but not at a YAPC level.

Committed to Catching Up

Elise first realized her YAPC donations weren’t automatically increasing while she was flipping through the annual Honor Roll in her process of pre-deployment house cleaning. “I noticed my name was no longer listed as a YAPC donor, but I was on too tight of a timeline to investigate further,” she says.

When Give CSB Day came around in November, she saw her chance to get back on track. “By that time,” she explains, “I was in Afghanistan and a phone call to CSB was not an option.” So she reached out by email to Maggie Weber Utsch ’00, director of annual giving.

From half a world away (and ten and a half hours’ time difference), Maggie responded with easy-to-follow instructions on how to change her automated monthly donation online. Elise adjusted those Saint Ben’s Sustainer gifts and made an additional online gift to make up the difference for the 2017-18 fiscal year.

“After my active duty service obligation is finished in 2019, I plan to move back to Minnesota and continue working as a family physician,” she says. “My short-term goal is to complete the YAPC program. When it comes to long-term goals, I plan to continue to support the women of CSB with my time, talents and financial resources for as long as possible!”