A beacon of Benedictine light

“She had a way of nurturing students in this non-confrontational, beautiful, Benediction way,” she says of her professor.

Despite living just a short drive from her family, JoBeth considered Saint Ben’s a second home. “I went home at Thanksgiving, Christmas and Easter, and that was it.”

If there was a musical performance on campus, you can bet that JoBeth was there – either singing on stage or in the audience. She sang with the Campus Singers women’s choir, Chamber Choir and All-College Choir, and was part of the first group of Bennies to tour Europe with legendary CSB/SJU choir director Axel Theimer. One of JoBeth’s favorite memories at CSB is heading to “the Loft” (the campus snack bar and pub, on the upper floor of what’s now the Academic Services Building) to enjoy listening to the campus Jazz Ensemble and sipping a beer with friends.

After graduation, however, JoBeth found something was lacking. She started a family and performed with the San Jose Opera and Santa Clara Musical Theater. But still, something didn’t feel quite right.

“I was longing for that Benedictine community,” she says of her post-grad life.

Ten years after leaving Saint Ben’s, JoBeth found what she was missing by becoming an oblate with the Sisters of Saint Benedict. Oblates are individuals who associate with the monastery to enrich their lives by living the wisdom of Christ as interpreted by Saint Benedict. Or as JoBeth puts it, “We take a vow to live out Benedictine spirituality in our daily life.” Oblates meet regularly for spirituality book studies, and they are invited to spend two Sundays at the monastery with the Sisters each year.

“It keeps me grounded in the Benedictine way. It keeps me accountable to be a good person, be a good human being,” JoBeth says of her experience.

JoBeth’s service to the Saint Ben’s community doesn’t end with being an oblate. She’s also been a dedicated member of the college’s Alumnae Board. “This way I can give back,” she says, “because I got so much from the college.”

And through it all, JoBeth was able to keep up the relationship with her professor, mentor and friend, S. Mary Helene. They wrote letters back and forth and saw each other when JoBeth visited the monastery. Eventually, S. Mary Helene began losing her memory and couldn’t recognize JoBeth. But they were still able to sing together, ending just how their relationship began.

“My last memory of her is of singing together when she didn’t have a memory of me. Her memory of music lasted until the end.” 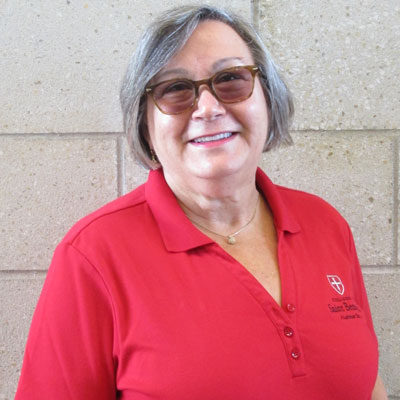 Majors at CSB: Music and history
First-year residence hall: “It was an over-flow year, so I lived with five other students in the Gable basement lounge.”
Favorite class: Voice lessons with S. Mary Helene Juettner