She’d Be Happy as a Secretary … Of State 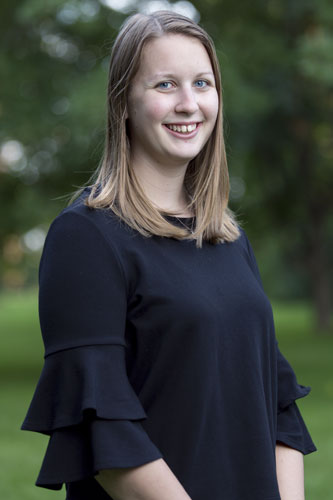 Laura Barry ’19 was a quiet student in high school in Lincoln, Nebraska. She lacked the confidence to make herself heard. As a Bennie though, she began to find her voice. She took on leadership roles. She became president of the CBS/SJU Model United Nations.

“Coming to CSB showed me how powerful and active women can be,” she says. “You can have the best of both worlds. You can be an amazing mother and make an impact in your profession. I’ve seen it first-hand in the alums I talk with.”

But going into her sophomore year, Laura faced financial difficulties and didn’t think she’d be able to return to Saint Ben’s. There was a gap of $2,000 between her resources and her requirements. She needed help.

For Laura, that help came in the form of the Roberts Family Scholarship for $2,000 – which she’s still receiving. Later she earned an additional scholarship for $500 that allowed her to expand her horizons and her perspectives studying abroad in Spain.

Today, Laura’s a senior with big ambitions. “I grew up hearing that girls can be anything,” she smiles. “But Saint Ben’s solidified it. I really believe it. I talk with CSB alumnae every day in my job with alumnae relations, and it’s amazing to see that whole network and to hear how they really do want us to succeed. I’m so grateful for that support.”

Right now she plans on becoming the U.S. Secretary of State. But wherever she ends up, it’s a safe bet we’re going to be hearing much more from Laura Barry.

Each year there are more students like Laura who can use a little help from you to amplify their ambitions. Please let them hear you today.