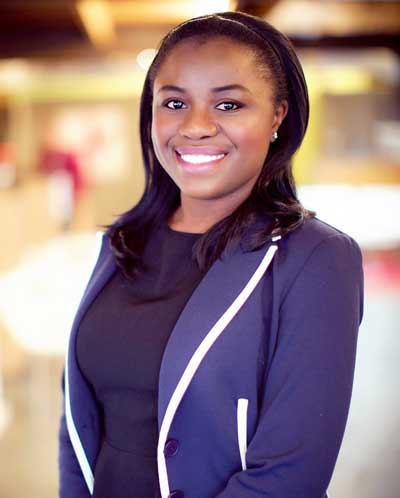 “I come from an entrepreneurial family, so the need to create and have my own business has been a path I have always been interested in, ”says Alison Guessou ’08. “While at CSB/SJU, I took an entrepreneurship class to learn how to develop and run a business. It gave me an understanding of what it takes to start a business in terms of feasibility and ideation.”

Between that family nature, her business administration major (it’s now become part of global business leadership) and a broad-based CSB/SJU education, Guessou was equipped to take off in a number of different directions. Rather than choose one, she’s chosen all.

Alison currently works as an independent contractor in project management for a number of companies. In addition, as an independent filmmaker, she’s founded and operates Djini Productions. Her short film 911 recently appeared at the 2018 Denton Black Film Festival in Denton, Texas. At the same time, she owns and operates Folebe Oil – a cooking palm oil distribution company.

“The liberal arts education (at CSB/SJU) helped me grow, in terms of not being afraid to take risks,” she says.

No matter which path she’s following on a given day, Guessou finds opportunities to put into play the Benedictine values she picked up in college. “No matter where I am, my hope is to make people feel welcome and heard, and going to school at CSB/SJU where that was exemplified, helped me recognize the values I hope to see out in the world. And if I don't see it, I see how I can create it.”