From daily musings to published author

“There was a process of becoming more aware of the outside world and from studying to be more interested in a broad spectrum of things and trying to do my best to be a good citizen,” she says about her Saint Ben’s experience.

After growing up on a farm in southern Minnesota, Marcia felt the rural location and small, tight-knit community of Saint Ben’s reminded her of home. During her years at CSB, she studied history, English and French and especially enjoyed classes with her favorite professor, S. Emmanuel Renner.

“S. Emmanuel was my mentor,” Marcia remembers. “She had this way of not just worrying about grades but really wanting people to learn.”

Despite studying writing at Saint Ben’s, Marcia didn’t immediately become an author. In fact, she didn’t publish her first book, “Hidden in the 13th Moon,” until 2017, almost 50 years after graduation.

In 1978, Marcia began keeping a journal as a place to compile her daily thoughts and observations. Eventually, she began focusing on observations of the natural world, whether it was urban waterscapes in Minneapolis or the animals on the family farm on the Kickapoo river in southwestern Wisconsin where she settled in 1985. She even kept pieces of paper near each window so her observations would be as fresh and accurate as possible when she entered them into her journals.

Years later, she looked back through her notes and decided to publish her musings. Her self-published book, “Hidden in the 13th Moon,” experiments with a combination of poetry, prose and “prose-etry,” as Marcia’s husband calls it.

“I really wanted to inspire people to respect this precious earth and do what they can to protect it,” Marcia explains. She also covers the enigmatic topic of grief in her work. “A lot of people in this culture are not given the space to grieve. I wanted to explain my own process of grieving. It’s a process, and there is a way forward.”

Marcia returned to Saint Ben’s in 2019 to present “Hidden in the 13th Moon” to the CSB/SJU community at an Alum College session during her 50th reunion weekend.

For more information and to order a copy of “Hidden in the 13th Moon,” visit www.hiddeninthe13thmoon.com. 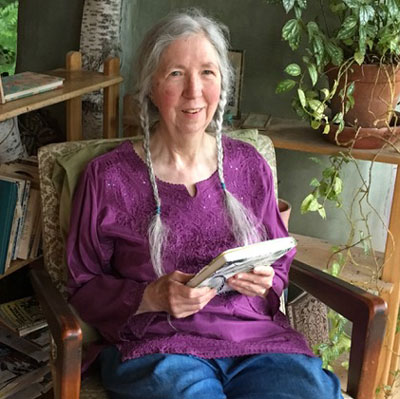 Major at CSB: History, with minors in French and English
First-year residence hall: The Rotunda in the Main Building
Favorite class: Any class with S. Emmanuel Renner