Perfecting the Art of Abandoning Perfection 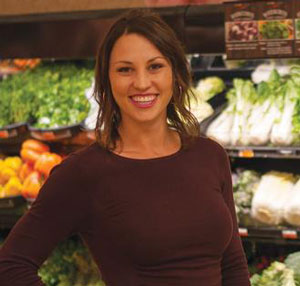 Emily Coborn ’08 was the alumna speaker during the CSB Kick-off at Reunion 2018. As a Bennie, she was a communication and Spanish double major and a member of both the track and cross country teams. In addition to her bachelor’s degree from Saint Ben’s, she also holds an MBA from the U of M’s Carlson School of Management.

Emily’s first professional role after graduating from Saint Ben’s was in the grocery business. That probably doesn’t surprise many, but what might be surprising is that her first job out of college was at SUPERVALU.

When your family’s name hangs over the door of 120 retail locations in Minnesota, Wisconsin, the Dakotas, Illinois and Iowa, but you want to chart your own course, sometimes it helps to take a bit of a different path.

So Emily started out in communications with SUPERVALU. Part of that involved speechwriting – which gave her access to executives she wouldn’t have met otherwise. And she learned from those interactions and observations.

Eventually she made her way home to the family business – working at Coborn’s first in communications, then directing their Topco program, then as a district manager and today as Vice President of Fresh Merchandising. In this current role, Emily is responsible for produce, floral, meat, seafood, deli and bakery merchandising and for Coborn’s team of registered dieticians.

Emily says her time at CSB was truly filled with some of the most impactful formative experiences of her life:

During her kick-off presentation, Emily focused on the Energy Project – or as she said, “how I’m perfecting the art of abandoning perfection.” She believes this is a battle that many women fight and that we need to take perfectionism off the list of things we deeply value.