Women of Faith Are Confident and Influential People 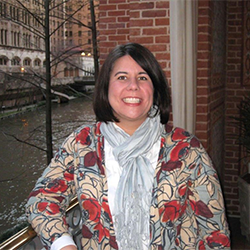 During her sophomore year at the College of Saint Benedict, Carrie Crook ’95 traveled to Denver, Colorado, to live and work at the Catholic Worker homeless shelter.

In just one month, the government major learned about Catholic social teachings and saw firsthand how Dorothy Day served and advocated for the poor.

“She inspired me to utilize my personal gifts to help others — then and now,” Carrie says.

After 20 years of helping others, Carrie was recognized for her good work. She received the Amate House Founder’s Award on Saturday, March 25, in Chicago, Illinois, for her dedication to the ideals of faith, service and community in her life and career.

“I have never been more humbled and more proud to be honored by my group of peers for the Amate Founder’s Award,” she says.

As a supervisor for Child Protection in Hennepin County, Carrie assesses the care of minors, especially those who are at risk of harm or abuse.

“My work demands I make a lot of decisions that impact children that I take very seriously,” she says. “CSB laid a strong foundation that I build upon every day.”

After graduating from CSB, Carrie moved to Chicago to volunteer for Amate House. Upon completing a year of volunteer work, she became the co-director of social care for St. James Church in South Chicago.

“St. James was located in the middle of some of Chicago’s infamous public housing developments, including Robert Taylor Homes and Stateway Gardens,” she says. “I continued to coordinate the neighborhood’s food pantry and was also responsible for providing social outreach to the urban isolated elderly.”

Two years later, Carrie moved back to Minnesota where she worked for the Greater Minneapolis Crisis Nursery, an emergency shelter for young children who risk abuse or neglect.

“We housed up to 40 children every night,” Carrie says. “I was responsible for creating their first formal outreach program aimed to reduce family crisis and build long term systemic change. That was almost 20 years ago, and it still exists today.”

After serving as the program director for their shelter and home visiting program, Carrie relocated to Austin, Texas, and earned her master’s degree in social work from the University of Texas at Austin.

In each position that would follow, Carrie made it her mission to implement change for the youth — in schools, shelters, government agencies and beyond.

“[I’ve learned] to think critically and independently, to seek support and create community,” she says. “Women of faith are confident and influential people.”