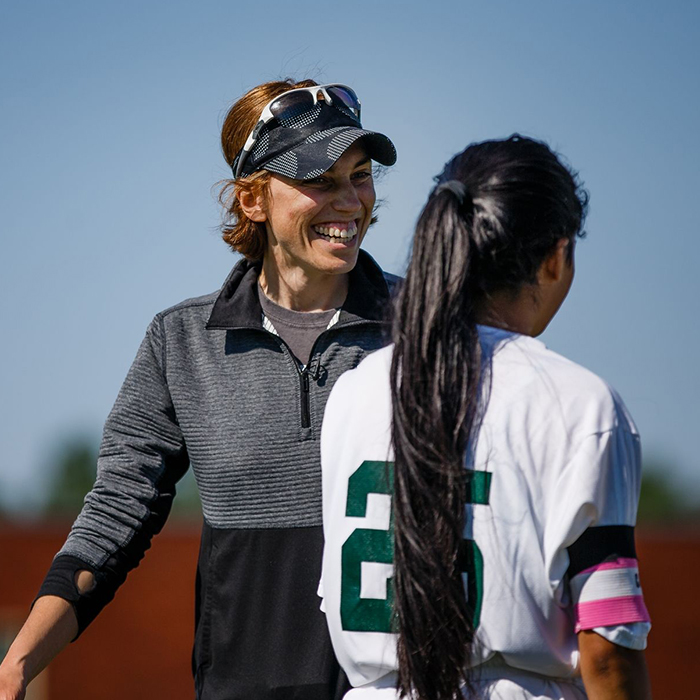 Lisa Grefe ’00 took a setback, and turned it into a success while following her dreams. And now that success has led to her being named All Iowa High School Girls’ Coach of the Year in spring 2017.

The Des Moines, Iowa native made a home for herself at the College of Saint Benedict by getting involved. Lisa played soccer for CSB all 4 years she was at school, and played basketball and golf for one year each.

Following graduation in 2000, the Psychology major spent the summer of playing in a semi-professional soccer league in Kansas City, She then made her way back to CSB as the women’s assistant soccer coach. “I have spent my career in athletic administration and coaching and credit Saint Ben’s for the confidence to lead and find my voice in a male dominated profession”.

In fall of 2004, Lisa went on to get her masters in Psychology at Springfield College in Springfield, MA.

Then, the setback came. Lisa was diagnosed with Chiari Malformation. Chiari Malformation is a neurological condition in which the cerebellum puts pressure on the spinal cord, which restricts the flow of cerebrospinal fluid. This causes pain, and occasionally problems with balance and coordination. Lisa underwent brain surgery 3 years ago, and is now focused on healing and building back up.

The team hadn’t won in over 60 games when Lisa took over as head coach.

Her first task was to build up the teams confidence and numbers.

In her second year as head coach, the team had a breakthrough season, winning six games. And while winning is great, Lisa says it’s about so much more, it’s about building the community.

“While winning is nice, it is even more amazing as a coach to see the girls start believing in themselves and what they could accomplish”.

Lisa focuses on creating a strong community and making the team a “family”. And she draws on her knowledge of the Benedictine value of listening to help build that community.

“The biggest life lesson I have taken with me is the Benedictine value of listening. Focused intention and attention to the people around you can really open up a wonderful dialogue, learning, and will help build a strong community around you”

Lisa has big goals for her future. But she is keeping her health and family as her top priority.

“I am in the process of reinventing myself and my career and am excited to be launching a coaching business”.

She also continues to coach the high school soccer team, which she finds very fulfilling, while still giving her the flexibility she needs to recover and heal alongside her family and friends.