Angela Guentzel ’10, winner of the 2020 Decade Award, has a lot going on, so it’s tough to define her. But you can get a pretty good feel for who she is in a single word: Rooted.

As a farmer, she’s committed to stretching and learning all she needs to strengthen both the ag industry and the crops that grow on her family’s land – right down to their roots.

As the sixth generation of her family (along with her brother) to work that land, she’s the holder of the traditions that keep her rooted in this life.

As a young professional who’s grateful for the opportunities her hometown has given her, she’s rooted in the Greater Mankato area.

And as a Bennie with strong personal and family ties to the college, she’s rooted in this Saint Ben’s community.

And, as a sociology major, she really planned on building a life in the human services field. She was well on her way toward that in 2014 when “we had a full-time employee leave the farm. And that’s when my brother asked me, ‘Is this something you’d consider?’ ”

Angela agreed and quickly found herself bouncing between the field, the shop and the office. A year later, she and her now-husband began a seed company, merging his sales background with her ag experience and familiarity with the community.

As she embraced her new career in agriculture, Angela discovered a few things: She had a lot to learn about agriculture; the ag industry needs active advocacy; and she has a chance to change the industry’s demographics a bit.

She began volunteering with Farm Bureau, serving at the county and state level. She joined the state board of the Minnesota Corn Growers Association – one of only four women on that board. Through that she discovered CommonGround – a women-in-agriculture organization where she’s found camaraderie and solidarity.

It’s a lot for 10 years. Not surprisingly, she doesn’t really care to speculate on where she’ll be 10 years from now. “I think it’s important to be open to opportunity and change and what could be coming around the corner,” she says. 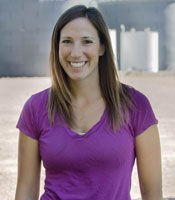