There are no miracles in Carrie Crook’s life of service. The hard-earned wins never seem suited for Hollywood. They’re real. And they’re what make this 1995 Bennie so deserving of the 2020 Benedictine Service Award.

When Carrie worked with the elderly in isolation in Chicago’s public housing, the elevator would get stuck. Her bags would get stolen. The van would get towed. And yet when Carrie would check in, Ms. Smith was always happy to sit on the couch together and hear about Carrie’s day. Ms. Smith’s message has become fundamental in Carrie’s work and life: “Your presence is enough.”

When Carrie volunteered with Big Brothers & Big Sisters in East Austin, Texas, her fundamental message to her little sister was simply to not get pregnant. “I just wanted to see her get through high school and not go through an unplanned pregnancy,” Carrie recalls.

So she supported as best she could and watched her little sister grow up in the child protection system, go in and out of residential treatment, in and out of jail. And eventually, “I’ve watched her get on her feet and now she’s a mama of two babies, in her twenties.” Carrie and she are still very close.

When Carrie became a foster parent, caring for two elementary-aged siblings, “Being a social worker and understanding on an academic and clinical level what an intervention was, I truly thought I was equipped,” she says. “But, as a single woman and parenting for the first time, I was challenged on every level.”

And yet there she was, not many years later, sitting alongside the children’s eventual adoptive parents, enjoying their school play. Sometimes your presence is enough.

What’s important to note about Carrie’s 25-year career is the breadth of places in which she has been present. And the many ways she has shown up.

She found her passion for service during her sophomore year at Saint Ben’s at the Catholic Worker House in Denver, where she was introduced to the ideals of Dorothy Day’s commitment to the poor and homeless. After graduation, Carrie enrolled in AmeriCorps, where she lived in Amate House and served in St. James Church in Chicago. She ran the neighborhood’s food pantry and delivered groceries to isolated elderly living in public housing. She moved to Minneapolis and worked in the Greater Minneapolis Crisis Nursery, a shelter for children under six years old. She moved to Texas to pursue her master’s degree in social work and worked with Communities in Schools of Central Texas as a middle school social worker – focusing on the social and emotional learning needs of students at risk of dropping out of school. She returned to Minneapolis to work for Hennepin County in Child Protection. And today, her journey has come full circle as she works with the elderly and isolated homeless population at risk of being infected by COVID 19 – serving over 200 adults living in a hotel that has been converted into a temporary shelter.

Along the way, Saint Ben's has gradually grown more dear to her. “I really think it’s the Benedictine values that I was taught there and I lean on now,” she says. “Being a woman educated at Saint Ben’s, I don’t have any parameters around my freedom to learn and my freedom to give back.” 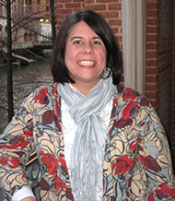