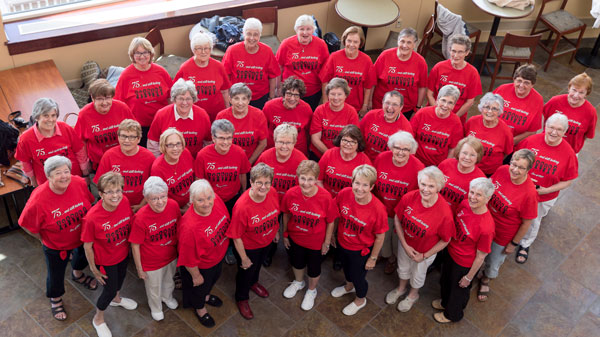 On a sunny day in late March, several members of the class of 1964 gather in Saint Paul. It has been 55 years since they left Saint Ben’s, but a fly on the wall might think it were witnessing a group of classmates on campus. There’s a clear bond among them, and even a touch of giddiness in the room. They’re planning their upcoming reunion, and they’re eager to share stories and mementos from past reunions and bounce ideas off each other for this one.

This class has remained deeply connected to the school, individually and collectively, giving generously of their time, talent and treasure. So much so, that for the first time ever, an entire graduating class has been honored with the S. Emmanuel Renner Service award.
The S. Emmanuel Renner Service award is not bestowed every year; instead, it’s reserved for those who have gone far above and beyond with exceptional service to Saint Ben’s. Several members of the class have held formal leadership roles with Saint Ben’s, serving as trustees and on the alumnae board. They also have a number of active class representatives and, as evidenced by this gathering, an enthusiastic reunion planning committee.

This group has been heavily involved in fundraising for Saint Ben’s, chairing committees and diving in when they could lend strength to a cause. In the summer of 1999, the class of 1964 lost one of their own. To honor her, the class formed a scholarship for women at Saint Ben’s studying theology. To date, the scholarship has been awarded to 11 women.

In addition to formal roles and fundraising efforts, these women have made a point to show up, literally and figuratively. They volunteer at events. They write cards. They mentor current and former students. They provide encouragement and information to prospective students. They pitch in on move-in day. They speak at events.

They also show up for each other. They turned their reunions into multifaceted events – memorials of lost loved ones and milestone birthday celebrations. The gusto with which they honor their losses and their joys, and the passion they bring to their service to Saint Ben’s, has inspired innumerable other alumnae.

There’s a reason there are no names in this piece. At their gathering, they were asked if they wanted to be named or to highlight individual accomplishments; a request that was declined politely and resoundingly. “There are so many members of our class who have done such incredible things, and so much of it is done quietly,” one class member explains. This humble spirit of service and community-mindedness is not an accident. When asked about the lasting impact Saint Ben’s has had in their lives, they mention the qualities modeled by their women mentors there (including S. Emmanuel herself): dignity of work, respect for persons, justice and hospitality, just to name a few.

There’s also a keen sense that they’re still on the journey that started here so many years ago. There’s still more work to be done. There are still people and causes to advocate for. There are still more joys to be celebrated and sorrows to be shared. There are still things to see. When asked about their bucket lists, the gathered members almost unanimously mentioned travel – from Japan to Madagascar and Easter Island to The Legacy Museum in Montgomery, Alabama. (“Maybe we should plan a trip!” they say.)
The bottom line, summed up with a winking smile: “We’re not done yet!”