Receiving the Benedictine Service Award only five years after graduation is impressive, to say the least. But then, Danielle Liebl ’14 herself is nothing if not impressive. She left Saint Ben’s with a degree in theology and peace studies, worked for a while and then completed law school (along with a master’s degree in public policy) and an internship with Microsoft before landing a full-time job at a prestigious law firm in San Francisco.

Award-worthy accomplishments – but that’s not even the half of it. Let’s back up a bit.

In high school, Danielle became involved with Special Olympics. Her mission: bring together people with and without disabilities “to help them realize they aren’t all that different and to confront some of the fear surrounding people with disabilities.” That in itself was a lofty mission. And Danielle, who herself has cerebral palsy, was just getting started.

After arriving at Saint Ben’s, Danielle saw an opportunity to further her mission. While still in her first year, she founded DIFFERbilities Experience. This club brought together students with and without disabilities from CSB/SJU as well as local high schools and offered unified sports through Special Olympics.

That first year, 10 students joined. By the time Danielle was a senior, that number had grown to 200 – plus a waiting list. DIFFERbilities Experience held events, brought in speakers and even created a program for preschoolers. As a senior, Danielle won the Peace First award, a national grant that allowed her to turn DIFFERbilities Experience into a formal nonprofit organization. (Chelsea Clinton interviewed her during the application process, and was also the one to call and tell Danielle that she’d won.)

The award meant that Danielle found herself as a newly minted undergraduate who went right into serving as the executive director of her own nonprofit, while also working a full-time job. And her work kept getting noticed. She wrote curriculum for high school and college students pertaining to youth leadership and inclusivity, and the curriculum struck such a chord with Special Olympics that it made sense to merge the two organizations.

Danielle’s formerly on-campus club was about to enter the big leagues. But what did that mean for Danielle? Around this time, she was asked to speak at the White House. There, she was seated next to Michelle Obama’s chief of staff who was struck by Danielle’s drive and recommended that she consider law school. The timing was perfect – with the merger, DIFFERbilities Experience would gain the resources and operational support of a major organization, while Danielle would open a new chapter. Now armed with her law degree, Danielle is still thinking big. She dreams of promoting inclusivity on a grand scale, working within corporations to help them be part of the solution.

Danielle works in California and finds time to volunteer with Special Olympics. She is quick to deflect personal praise and turn focus on the cause, but her impact is undeniably the product of passion blended with tireless effort. Why take on so much? Her answer: There are a lot of people out there who believe in something but never take action. But if everyone did that, nothing would get done. “So many people think, ‘I just don’t have the time right now.’ But you’re never going to have the time. If it’s something you’re really passionate about, it’s not going to feel like you’re making time, because you love it.” 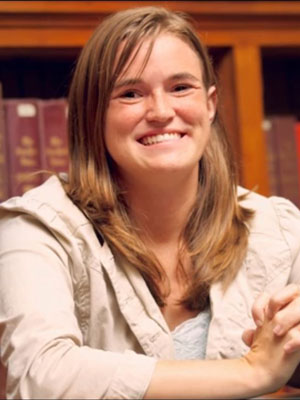