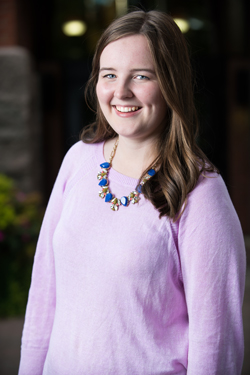 As my junior year of high school began and I started researching what colleges I wanted to apply to, Saint Ben's was far from the list.  My mom graduated from Saint Ben's, and being the independent and rebellious teenager I thought I was, I did not want to become a Bennie.  As I continued my research, the thought of attending Saint Ben's became more and more attractive.  I was so impressed with the phenomenal study abroad program because of my love of travel.  When I visited the college, I could feel the support between the students.  I knew Saint Ben's was a special place.

When I received my scholarship in the mail, I knew Saint Ben's was the place for me.  The scholarship not only made Saint Ben's an affordable option for my family and me, but it also showed me how much Saint Ben's valued me as their student.  Their consistent support and contact throughout the application and decision process was comforting and the financial support they were willing to give was so generous.  I knew I wanted to be a part of a community that was so willing to make gifts to Saint Ben's to allow Bennies the same experience they had.  The sense of community while attending St. Ben's and after graduation continues to impress me every day.