The O’Connell Society, in honor of Sister Colman O’Connell 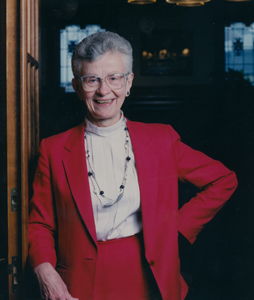 Sister Colman O'Connell, OSB was the 11th president of the College of Saint Benedict from 1986-1996. As president, S. Colman led CSB through many academic changes and organizational modifications, as well as the construction of several new buildings on campus.

Sister Colman's presidency was full of exciting changes for CSB. She and Br. Dietrich Reinhart, president of Saint John's University, continued to grow and expand the coordinate relationship between CSB and SJU through the implementation of a joint core curriculum and joint academic departments. New majors of Peace Studies, Communication, and Computer Science and new minors of Asian Studies, Athletic Training, and Gender Studies were added to both schools' offerings.

An important administrative development was the creation of the Coordinate Cabinet, which is composed of CSB and SJU presidents and vice presidents. Sister Colman served the College of Saint Benedict as a Senior Development Officer within the department of Institutional Advancement until she passed away on September 30, 2017.