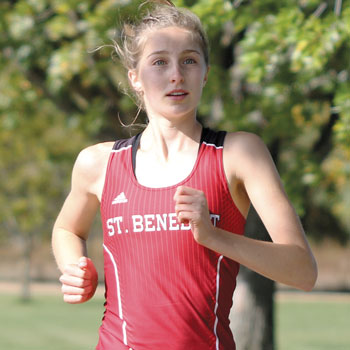 In February, we held the firstever Saint Benedict Athletics Give Day – 24 hours dedicated to fundraising in support of Bennie student-athletes. And, as athletes are prone to doing, the teams got a little competitive with each other.

In the end though, no team came close to the performance of the track and field and crosscountry teams led by coach Robin Balder-Lanoue ’91. Track/cross country had the most donors (with 130 – the second-place team had 62 donors) and generated the most money: an impressive $15,015.

“I reached out to our alumnae and asked a few people to be a voice for athletics, and they absolutely took off,” recalls Robin. “They created some top-notch videos on social media and reached out to friends and former teammates.”

The Institutional Advancement team helped with social media tools, tips and instructions, but track/cross country advocates grabbed that baton and took off at a sprint.