Please update your web browser or disable Compatibility View.
Give Saint Ben's
Home / CSB Alumnae & Friends / Give Saint Ben's / 2019 Honor Roll / You Get What You Pay For

You Get What You Pay For 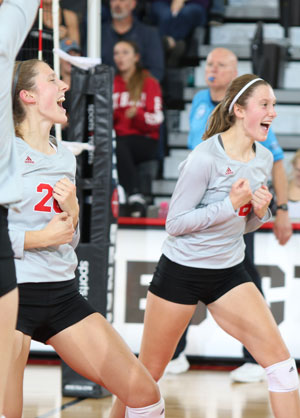 “My parents always emphasized that you get what you pay for, and investing in a good school and education is worth it for the future,” says Maddie Weiss ’21.
So when Maddie started selecting a college, her parents were very supportive of her choice of Saint Ben’s. After all, Rebecca Jensen Weiss and Travis Weiss are both 1994 Bennie and Johnnie alums themselves.
But Maddie’s twin sister Hunter had also selected Saint Ben’s. … And their older brother Tyler (SJU ’18) was returning to Saint John’s for his senior year. “The scholarship portion was huge for my family,” confirms Maddie.
Fortunately, Saint Ben’s was able to offer a financial aid package that made CSB practical for both Weiss twins – thanks to scholarship support from donors like you.
The results have been impressive. Both Maddie and Hunter star for the Saint Benedict volleyball team. Last season, as sophomores, Maddie was named a Third-Team All American. Hunter was named First-Team All American – the first for Saint Benedict since 1993.
Meanwhile, both biology majors have excelled academically. Last year Hunter was a winner of the MIAC’s Elite 22 Award (which is presented to the student-athlete with the highest grade point average in each sport who met similarly high athletic requirements). “Playing DIII volleyball has allowed me to not only grow as an athlete,” says Hunter, “but also as a student.”
Two outstanding students. Two outstanding athletes. Two outstanding Bennies, with the help of scholarships. Guess you really do get what you pay for.