Look at Her Go 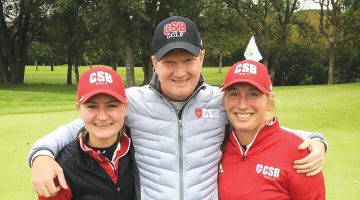 Natalie Amundson ’19 and Madeline Pagel ’19 met as first-year members of the Saint Benedict golf team.
“Realizing we both planned on majoring in nursing, we quickly became friends and have been inseparable since,” says Madeline.
Inseparable and successful.
They both excelled on the golf course, eventually becoming co-captains. They both thrived in the challenging CSB/SJU nursing program. This past spring, they both earned their degrees and became nurses – both at the Mayo Clinic in Rochester, Minnesota.
“I am loving my new home and the challenge of my new career,” says Natalie.
“We are so thankful for the experiences and the doors that have been opened to us through our time at CSB,” concludes Madeline.
There’s no telling where their paths will take them. But their successes so far have made them two to watch.