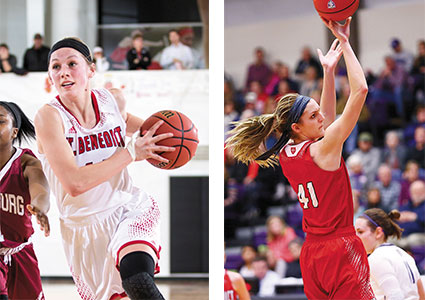 During their final season of CSB basketball, Chelsey Guetter ’18 and Niki Fokken ’18 helped lead the team to its best season in nearly a decade—and both players cemented their individual spots in the record books.

The co-MVPs closed out storied careers that saw them deftly balancing the rigorous, simultaneous demands of sports and academics.

Chelsey earned CoSIDA Academic All-American Second Team honors, and Niki, who was also a standout on the track team, says being at a smaller school like Saint Ben’s “allowed me to have a more rounded lifestyle, rather than focusing strictly on academics or sports.”