In her first season as CSB softball coach, Rachael Click had no home games. 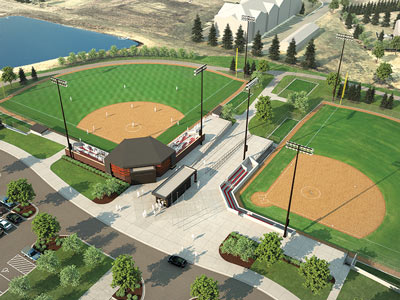 In her second season, her team had two home dates (four games). Granted, the winters of 2013 and 2014 were rough, and the past three seasons have been better. But this is Minnesota. It seems like we’re always just one shifting Gulf Stream away from another “rough winter.” So the full-turf softball field at the new College Avenue Athletic Fields is a big deal for Rachael, her team and their fans. The turf field is more plowable. The surface gains and retains heat better than a dirt and grass field. And as soon as the snow is cleared, the turf is in game shape – unlike a field of dormant grass. As Rachael puts it, “When you’re looking to keep home games on the schedule, keep them on time and keep student-athletes on campus and in class, this is a tremendous advantage.” Through institutional commitments and support from donors like you, they’ll have a home field to defend (in a hospitable, Benedictine sort of way, of course). That’s important to potential recruits, visiting teams, varsity athletes, club sport athletes, intramural athletes, coaches, fans… In fact, with the location right on College Avenue, the fields are important to the whole community. As President Hinton says, “I want the young girls on the bus to Kennedy to drive past those fields and think, ‘I want to play there some day.’ ” This new complex will let Saint Ben’s offer a warm welcome on more cold days.