When Kelly Fermoyle first began looking at colleges, his sights were on the big universities.  His interest in Saint John’s University (SJU) sparked from a telephone call he received from SJU cross-country coach, Tim Miles.  Besides talking about the sport, Coach Miles introduced Fermoyle to the atmosphere at SJU and its educational partner, the College of Saint Benedict. After a campus visit in the fall of his senior year, Fermoyle knew this was where he wanted to be.

“It was an easy decision for me because it felt right at SJU and I wasn’t interested in any other schools anymore,” Fermoyle said. 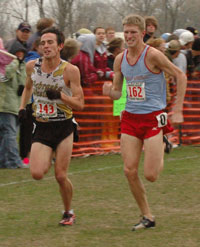 Since beginning college, Fermoyle has made the most of the variety of opportunities at SJU.  In the fall, he runs cross-country; in the winter and spring, he runs track.  His junior year, he placed 28th at the NCAA Division III Championships in cross country to earn All-America honors.   He lived on-campus each summer from his freshman to senior year.

All of this while working hard to obtain a major in Computer Science and minors in Math and Economics.

Fermoyle is one of the few students who entered college knowing what he wanted to major in and has stuck with it.  He was interested in Computer Science because of his genuine enjoyment in mathematics and his desire to further apply that knowledge.  Also backing his choice of a major is the rapidly growing field of employment for Computer Scientists.

“My advice to a student considering a major in Computer Science is to make sure they know what the subject really entails,” Fermoyle said.  “Many people think having a lot of experience using computers implies that you will be a good candidate for computer science. The reality is that programming computers is a separate entity and computer science can be done on paper. It is really about problem solving and being able to learn programming languages. “ 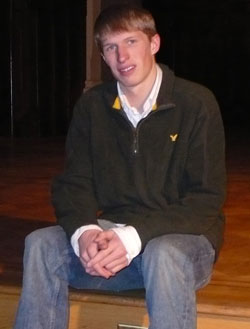 The summer before his junior year, Fermoyle began his current research project with the Computer Science department.  The key question his research focuses on is:  “When and how can high-level programming environments such as Star-P and Matlab be used for large-scale parallel computing instead of standard programming languages such as Fortran?”

Translation: “If we are able to obtain high levels of parallel performance in these environments, we can greatly improve programmer productivity, lower the barrier for scientists who are not programming experts and allow computing to be done in rich interactive environments such as Matlab,” Fermoyle explained.

With his interest in Computer Science, it is no surprise that Fermoyle plans to attend graduate school after he leaves SJU.

Fermoyle expressed immense gratitude to and respect for his professors for all they have done to help him reach his future goals.