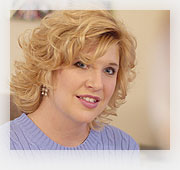 That openness has allowed her to do research and teach communication by the numbers rather than the nuances. She is teaching a course this year, for example, about strategic communication campaigns, taking a very “social science” approach to persuasion. Joan Steck, the chair of the department, also teaches a class in persuasion, but in looking at the syllabus, Szabo was glad to see they were coming at it from very different directions. She says of her fellow professors, “we’ll take an issue and approach it very differently, but we come to similar conclusions. We just get there in a unique way.”

After discovering through several discussions with a colleague that school children were being frightened by “what they’d seen or heard that day on the news”, communication assistant professor Erin Szabo decided to pursue an investigation into children’s fear response to the TV news.

Her preliminary findings, after working with kids at a school district in central Minnesota, revealed that students were indeed frightened by the news on TV. As you might expect, the level of fear differed based on the age of the student. Parents need to realize, says Szabo, that students at all age levels are forced to watch TV news in school, and it can create a lot of fear in younger kids. The upshot of the investigation is that we probably need to be more careful about what we expose our young people to as part of their education.

Even though Szabo pursues research and worked for a year on a large project investigating the effectiveness of anti-smoking on 5th and 6th grade students, teaching is her first love. “When it came down to it, I chose the small liberal arts school over the research university because the students are really why I went into it. I love the research, but I love the teaching more,” says Szabo. She sees communication as cross-disciplinary by its very nature. Szabo explains that a humanities approach to communication involves interpreting and uncovering meaning in text, about “finding an answer.” She relies on quantitative research because, as she puts it, “my ultimate goal is objectivity. It’s all about finding the answer.”